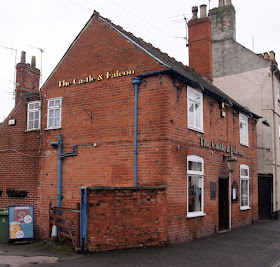 Outside of the more upmarket gastro venues and town centre managed bars, most pubs still include games as part of their offering, even if it's just a Dart Board or a set of Dominoes perched on the windowsill. They may not attract the attention of customers in the way they once did, but it's good that so many licensees still see traditional pub games as part of what makes the British pub such a unique and special place. Of course publicans like to see their Darts and Cribbage Boards in use, not least because it ensures steady custom over the course of a few pints, and in the case of league play, a welcome bit of trade on the less busy days of the week.

For some pubs, such as the Castle & Falcon featured here, the gaming is more than just an element, it's pretty much the whole point of the pub. It's also a major part of why this pub in particular continues to thrive where others have struggled or even closed in recent years. That and the fact it's a popular, well run locals pub that's equally welcoming to visitors like myself. 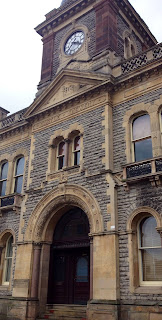 Newark itself has certainly not escaped the loss of many well-loved pubs over the years, and yet it seems to have retained a much healthier number than other similarly sized towns. Newark was of course a major brewing town, indeed the Castle & Falcon stands in the shadow of the former Castle Brewery (left), once the home of Holes Newark Ales, and latterly John Smiths (which helps explain the prevalence of their 'Magnet' ales in many of Newarks pubs).

In recent years Newark's pub scene has regained much of its former glory, to the point where it's now something of a beer enthusiasts destination with regular beer-themed festivals and events. Along with a handful of relative newcomers such as Just Beer and the Vaults, some of the older pubs in the town have been successfully reinvented as speciality beer bars. Great news for pub-goers, particularly given that some of the more traditional 'locals' pubs like the Castle & Falcon still survive largely unchanged, which means there's something for everyone, even traditionalists like myself. 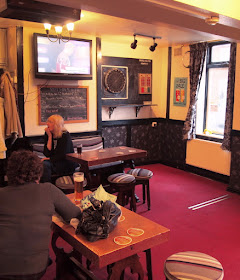 The Castle & Falcon is a pub I've been keen to visit for some time, but the slightly limited opening hours have frustrated me on previous trips to Newark, Fridays and Saturdays being the only lunchtime opening. I eventually managed to pop in on a Saturday, and was warmly welcomed in the front bar where international Ladies Darts held sway on the television, not surprising given that Darts is probably the most popular game at the pub. 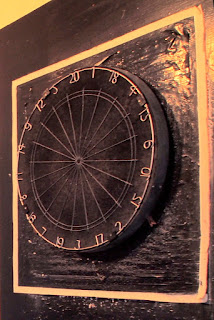 Adjacent to the televised action is one of several Dart Boards dotted around the pub, this one mounted with the unique and distinctive Doubles board local to the area, and which happens to be the more popular of the two versions played in Newark. This style of board is known as a Lincoln Doubles Board, and differs from the standard board in having no trebles ring and no outer bull. The Lincoln board is itself identical in layout to the Yorkshire doubles board, differing only in the all black colouring. The Castle & Falcon has Dart Boards in both the front and back bars, as well as in the separate function room. With four mens and two ladies teams playing out of the pub in the local Newark & District Doubles Darts League (which is sponsored by the pub), as well as the Trebles Board Darts League, all of these oches see regular use throughout the week. 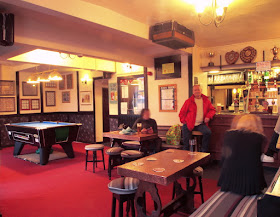 There are currently attempts to revive Cribbage play at the pub, but I'm pleased to say that league Dominoes and Pool are still going strong. The other major pub games league which features at the Castle & Falcon is the Newark & District Long Alley Skittles League, played at several venues in the town and further afield through the summer months. The alley at the Castle & Falcon is an outdoor one, as many are round these parts, albeit that most are in fact covered these days against the worst of the elements. The Newark Table Skittles league folded several years ago, but many of the pubs in the area still have a table available for play, though you may have to ask for it to be brought out of storage. 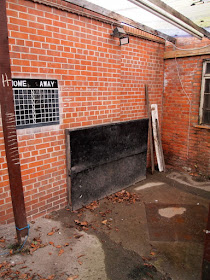 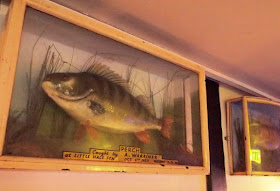 Newarks close proximity to the River Trent means that fishing is popular throughout the area. The corridor at the side of the pub, with its serving hatch (below), is devoted to the trophies and catch records of local angling competition. 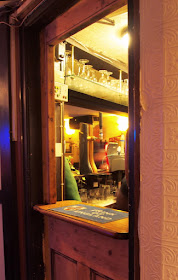