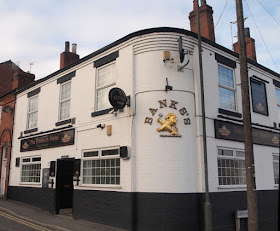 The Derbyshire town of Ilkeston was, until quite recently, famous for being the largest in the country with a passenger line running through it, and yet no rail station to call its own. On the 2nd of March 2017 this anomaly was finally put right with the opening of a shiny new station on the Midland Mainline, bringing the town within 10 minutes of central Nottingham, and suddenly a whole lot easier to get to for pub-goers like myself who tend to avoid using buses wherever possible. Great news because Ilkeston is blessed with a fair few pubs, many of which I've found are well-worth travelling for. 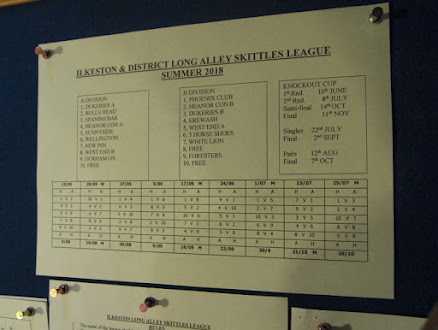 From the perspective of this blog, Ilkeston has also achieved some measure of fame by giving its name to one of the two local skittles leagues. The whole area immediately north of Derby and Nottingham maintains a strong skittling tradition, a version of Long Alley Skittles the game of choice for generations of pub and club-going men, and to a lesser extent the women of the area. The popularity of Long Alley in this part of the East Midlands is undoubtedly connected with the heavy industries that once dominated the working landscape, the game remaining particularly strong in former colliery areas like Ilkeston, Ripley, and Clay Cross. In fact it's likely that the tall skittle pins which are such a distinctive feature of the game would often have been turned-up from the abundance of discarded pit-props found locally, a service which is still offered today by at least one local skittles maker I'm aware of. 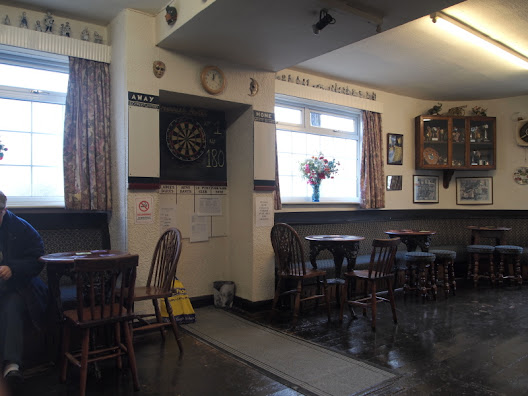 The Erewash Hotel lies on the eastern side of the town, conveniently located just a short walk from the new rail station. The pub takes its name from the nearby river valley, which itself defines the course of the Erewash Valley railway line. I don't think it operates as a hotel these days though. Don't be fooled by the striking Banks's Brewery livery on the corner of the pub, the Erewash is now free of tie and all the better for it in my opinion. I certainly enjoyed my pint of Nottingham brewed Shipstone's Bitter, and aim to look-in at the pub next time I'm passing in the hope the excellent dark Mild is available from this recently revived local brewing name. 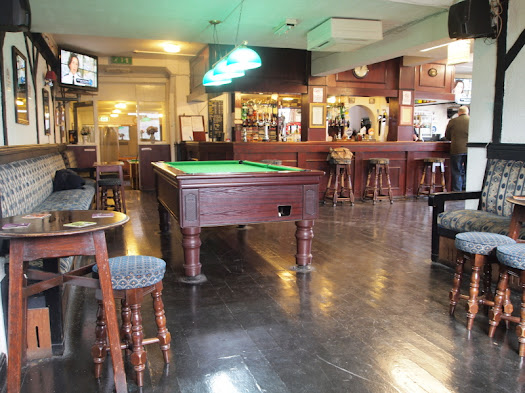 The interior of the pub has been opened out over the years to form one large traditionally furnished room that's split into two distinctive areas by the original entrance hallway. It's a beautifully maintained pub that's clearly well-loved by it's locals. 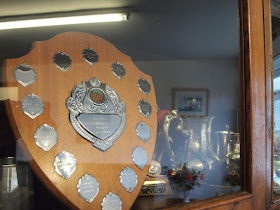 To left of the entrance is bench seating and one of two Pool Tables at the pub, traditional games being at the very heart of the Erewash Hotel's appeal. To the right is a Dartboard, also one of two, and a satisfyingly busy trophy cabinet, the contents of which include the shield shown here which is for Long Alley Skittles. 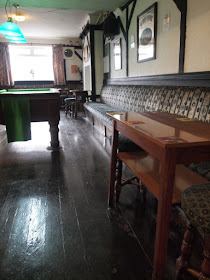 Competitive skittles is played at the pub in the Ilkeston & District Long Alley Skittles League, a Sunday league of two divisions made up of around 16 teams playing from pubs and clubs in and around the eponymous town. 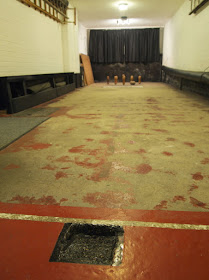 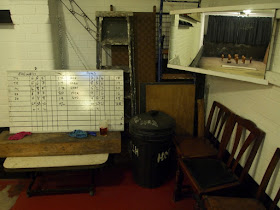 The skittle alley is accessed through a small games area at the rear of the pub, home to Pool and Darts. Most alleys in the Ilkeston League are now either indoor or covered, though there are plenty in the Notts and Derby area that are still entirely open to the elements. Hence the game is predominantly a Summer pastime, though the Ilkeston League has Summer and Winter competitions, and the Notts/Derby Border League operates a Winter competition for venues with an indoor alley.

Indoor skittle alleys like the one at the Erewash Hotel can present problems for spectating the play, many only viewable from one side, or to a limited number of players. At the Erewash they've aimed to get around this by installing a large angled mirror at the 'throwing' end of the alley (above). As you can hopefully see in this photograph, the mirror makes viewing the game possible even from the adjacent indoor games area, located around the corner from the alley and with no direct view of the skittles frame. I've seen a similar solution at a pub in the Cotswolds, where the totally enclosed skittle alley is fitted with a small CCTV camera overlooking the frame, and a small television in the seating area which serves to relay the action to players and spectators (the New Inn at Heanor is in the process of installing a similar televised system). 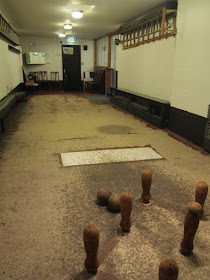 With the Summer skittles league due to kick-off within the next few weeks, I can see myself returning to Ilkeston and surrounding villages more than once through the Summer, and it would certainly be nice to catch a game at some point. For those of us travelling by train, it's worth knowing that the excellent Dewdrop holds the title as unofficial waiting room, being just a stones-throw from the new station. A great traditional 'Beer and Cheese & Onion Cob' pub, though sadly the outdoor skittle alley remains out of action.
UPDATE: Since this post was published, the owners of the Erwash Hotel have retired and closed the pub.
Mark at 08:20
Share

I've not been to Ilkeston but you've sold it to me! Quite a lot of pub games have regional differences? I like that as it shows tradition...great looking boozer just for a general visit! ��
Britain Beermat

This whole area of Derby/Notts seems to do pubs so right in so many ways. There are maybe half a dozen pubs in Ilkeston I'd highly recommend, with a few more that won't exactly disappoint. The Langley Mill station stop looks a good one too, albeit there may be a bit more walking involved.

The golden lion in grandstand Rd Hereford is my local pub as pubs used to be years ago. It is a friendly pub and is comfortable to be in. There is no fancy decor and I am very glad to have it as My Local. LONG MAY IT CONTINUE as they are rare to find these days

Couldn't agree more, I wish the Golden Lion were my local too. I've copied your comment to the relevant post. Thanks.