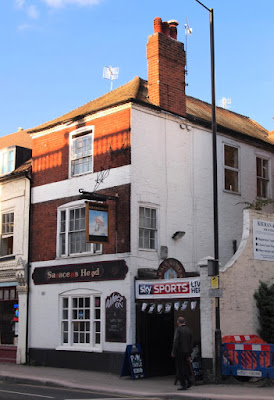 Turn right out of Worcester's Foregate rail station and you'll find the road to Barbourne still has a good few pubs along its length. There's a Wetherspoon if you like that kind of thing, and a cluster of more traditional pubs on or near The Tything. These include noted alehouse the Dragon Inn, and the slim profile of the Lamb & Flag. The latter retaining its traditional two small rooms where so many similar pubs have been knocked through for convenience. The Lamb & Flag is famed not only for the quality of its Guinness, but it's also the home of the Worcester Backgammon Club and a World Conker Championships in October.

Another pub which retains a traditional multi-room layout is the Saracens Head, a busy locals pub on the Tything, and the only one on this stretch of road with a Skittle Alley (until you reach the suburb of Barbourne itself where the Swan Inn is also equipped for the local game). At first glance the Saracens Head looks barely big enough to house a Table Skittles set, never mind a full-size alley, but the modest frontage of the pub is deceptive, concealing a premises which stretches back quite some way.

The Saracens Head has a reputation as one of the more popular pubs in this area of Worcester, and was certainly one of the busiest when I visited over the course of a long weekend during the recent rugby world cup. Televised sport plays an important part in this popularity, and I was advised by locals that the pub could get very busy during major sporting events. This makes it all the more surprising that the pub had actually closed in April of this year, the previous licensees citing the excessive rent charged by the pubs owners. Thankfully the pub is open again, and hopefully a permanent fixture of The Tything, but this gives the lie to those who seem to think only badly run or poorly supported pubs close, the Saracens Head being anything but! A long, covered cobble-stone yard to the right of the pub gives access to the front and rear bars, and leads eventually to the sizeable skittle alley/function room. The front bar (above) seems to be the main social and gaming hub of the Saracens Head, and this is where you'll find the pubs well-used Darts Board, with home matches played on Wednesday nights in the Worcester Darts League. 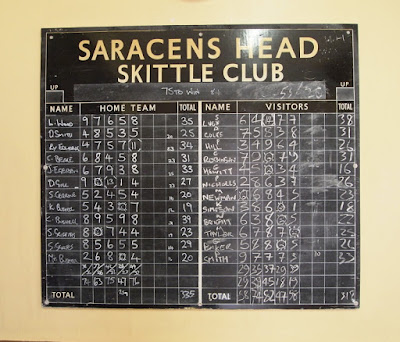 Whilst numerous alleys have been lost to pub closures and refurbishments in recent years (the Bridge Inn was in the process of closing when I visited), skittles is still popular and well supported in Worcester. The game is played at the Saracens Head in Division 1 of the Wednesday night Worcester Friendly Skittles League, and having spoken to several people involved in the game over the weekend, the alley at the Saracens Head is regarded as one of the best in the area.

The pub also plays host to a knockout competition in the summer, a time of the year when many players would prefer not to commit to league play. Invitation competitions like this offer the chance for skittlers to keep their hand in during the lengthy off-season. 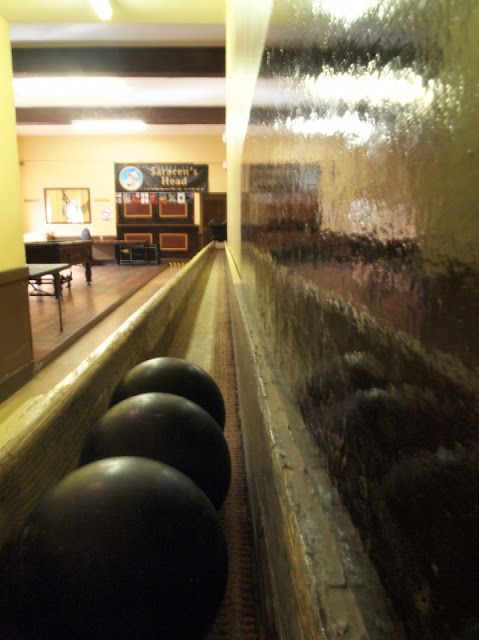 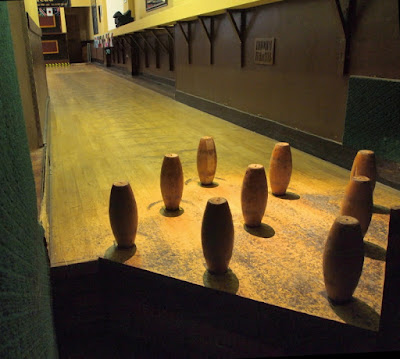 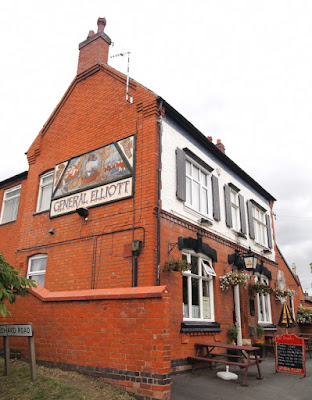 I would guess that most people remember the occasion of their first pint in a pub. Often underage, probably buoyed by the company of friends, and something of a right of passage for many. For me it was a case of 'in at the deep end', a true novice amongst experienced drinkers, and a tentative introduction to what was then an alien and unfamiliar adult world.

As a boy, my only direct experience of the pub was on errands for cigarettes and chocolate, peering through the 'Off Sales' hatch of what would eventually become my local, the Black Horse in Aylestone. From there you could see the blokes propping up the bar, smoking, chatting, sinking pints. Couldn't miss the fug of stale beer and tobacco smoke. A strange and frankly uninviting environment it must be said.

I don't recall ever being taken inside a pub as a youngster, so when I started work as an apprentice at the tender age of 15, the regular work-time 'liquid lunches' in the company of adults were a new experience for me. I guess that's why that very first occasion, a long lunchtime boozing session with the men, the 3.5 tonner parked discreetly round the corner, sticks in my mind so clearly.

The General Elliott was the pub, Draught Bass the beer, and the tiny snug to the right of the front door the venue for two or three hours of solid afternoon drinking. A risky, dangerous, and quite probably sackable offence, and yet a common and regular occurrence at the time. Needless to say, I look back on those days with a mixture of horror (there was no designated driver!), and huge affection for what was probably a golden era of pub-going, the like of which we will undoubtedly never see again. 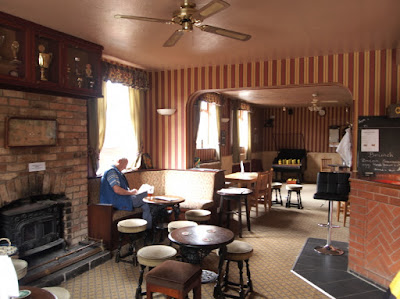 I recall visiting the General Elliott several years later as part of some cycling adventure or other. I can't remember whether the little snug still existed then, but apparently it's been gone for a good while. The pub now consists of a single L-shaped room. A snug-like area remains to the right of the entrance where the original separate room once was, the pubs traditional Skittles Table and Dart Board located at the other end. Though it's certainly changed a fair bit since my first visit, the General Elliot is still very much a traditional village local, and revitalised in the hands of enthusiastic new licensees when I visited in the summer. 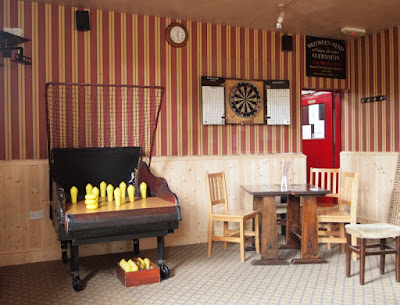 A typically short entry in CAMRA's 1979 guide to Real Ale in Leicestershire & Rutland confirms the two room layout, as well as the existence of Table Skittles. The Northampton made W T Black & Son skittles table is probably in much the same location as it was back then, though whether the legs had been modified with a set of wheels as it is now, I couldn't say. It definitely didn't live in the smaller snug, and we didn't play a game back then in the early 80's.

The General Elliott currently fields two teams in the Dunton Bassett Skittles League, and a more general Games Night is held on Tuesdays.

In recent years the pub had kept somewhat limited 'rural' opening hours, but weekday lunchtime opening has now been restored by the current licensees, and an improved beer range to match. I'm pleased to say that the Draught Bass is still popular with the locals, and this lovely traditional village pub is a great destination for food, drink, maybe even a game of skittles. 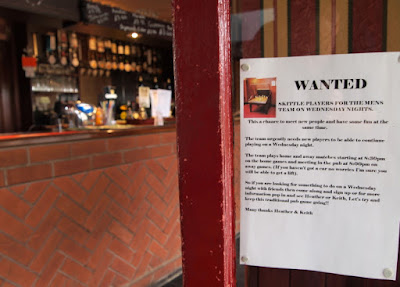 Posted by Mark at 07:02 No comments: Links to this post

Anyone who's ever wasted valuable time trying to find an open pub in a rural area, with or without the aid of an up-to-date guide, will know how increasingly rare it is to find a pub of any kind in the 'sticks' these days. This is particularly true of smaller villages and hamlets with their modest local populations and minimal passing trade. Chances are that when you do find one though it will be a pretty decent pub, albeit one with more of an emphasis on food than drink these days. 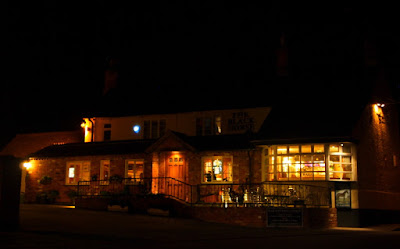 In the hour or two I spent at the Black Horse in Caythorpe, passing trade seemed to be almost non-existent. The pub presumably derives some benefit from its location close to the River Trent and the nearby fishing and boating lakes, but occasional visits from walkers, boaters, and fishermen alone can't keep a pub like the Black Horse open. For that it needs the enthusiastic support of its locals, and perhaps something a bit special to attract pub enthusiasts like myself. It also helps if you can offer a beer range which is slightly different, ideally better than the one that so many tied pubs are saddled with. 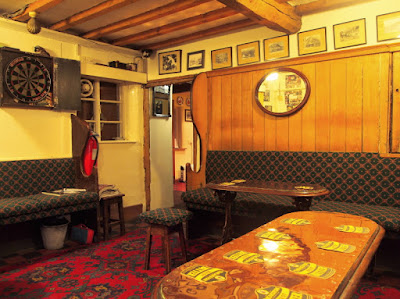 Being a freehouse and offering beers from the tiny Caythorpe Brewery, located in an outbuilding at the rear of the pub, certainly helps in this regard, although the bar room staple of Draught Bass is still popular with regulars, as it is with me. The beer is very good of course, and for some, this alone might make the detour from the main road worthwhile. For me though, it's the beautifully unspoilt interior that drew me to the pub, which along with the warm welcome from the licensees is presumably a large part of the attraction for the locals too. It has also been recognised by CAMRA, featuring on their list of unspoilt heritage interiors. 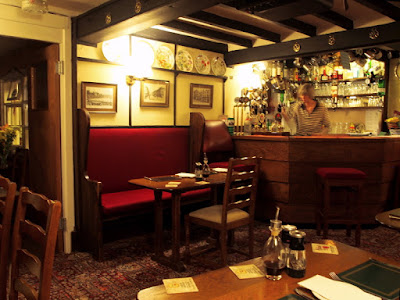 The pub has been extended in more recent years, and a lobby which links the two original rooms covers much of the red brick frontage. The slightly larger main bar is to the right of the entrance (above), featuring old fixed bench seating and a bar counter in the corner with the all-important handpumps, at least one of which dispenses a beer from the in-house brewery, best bitter Dover Beck when I visited. 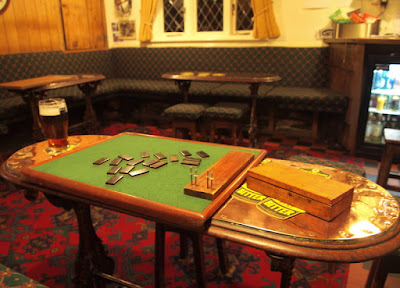 It's the smaller snug to the left of the entrance that most appeals to me. The word 'cosy' is of course terribly overused in descriptions of pubs, I'm as guilty of that as anyone, but this really is a place to settle in for the night with friends and a few pints. A wood burner cosies things up even further in the winter, the diminutive size of the place conducive to the age-old tradition of a chinwag over a pint or two. This room also acts as the games room of the pub, home to a Darts Board as well as all the equipment needed for the rattle of Dominoes or the shuffle of Cards. There's even a Shove Ha'penny available, though little used these days.

The Black Horse keeps fairly traditional opening hours, which means a lunchtime and evening session, not all day, and the pub is closed Mondays. It's probably best phone and check if you choose to divert this way yourself. It's also a traditional adults-only venue, so don't bring the kids! 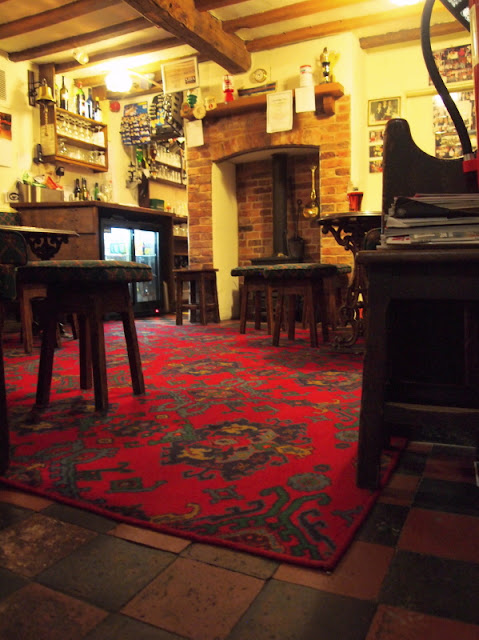 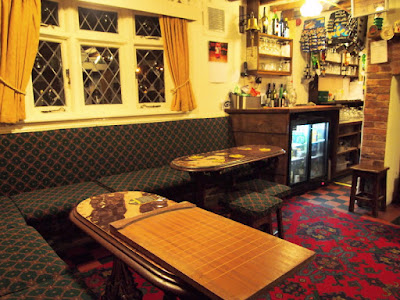 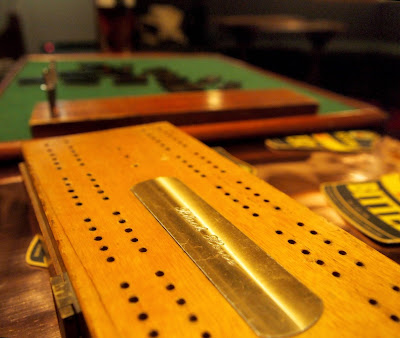 Posted by Mark at 08:21 No comments: Links to this post