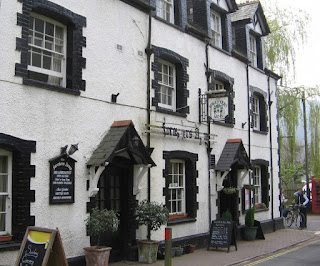 Has there ever been a worse time to return to a much-loved pub after a long break? Change, as we all know, is a given in the pub trade, but for traditionalists like myself the wholesale changes that have occurred over the last few decades have more often than not been anything but good.

From the widespread 'knocking-through' of classic multi-room pubs in the 1980's, to the bland, blonde wood and sofa refurbs of more recent times. Add to that several decades of chronic pubco-inspired neglect and the epidemic of closures that inevitably followed, and the maxim that 'things ain't what they used to be' has never seemed more apt. It was with this in mind that I visited the Foresters Arms, a Somerset boozer that's been a regular, if infrequent stop for me when holidaying in the Minehead area for around three decades now. I needn't have worried... 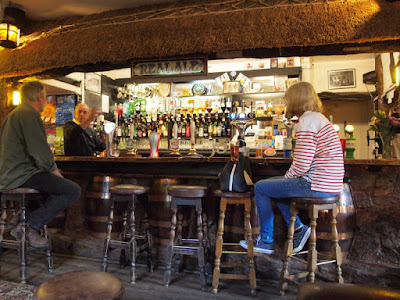 The Foresters might be regarded as the last proper locals pub in Dunster, a village that's extremely well served with cafes, restaurants, and generally food-oriented venues like the historic Luttrell Arms. Under the same ownership for longer than most these days, the pub is reassuringly much the same now as I recall from previous visits. It's worth a visit if only to admire the rare surviving thatched and barrel-fronted bar servery (above), a once common feature of village pubs in the 70's and 80's, though sadly not, as yet, old enough to be considered for statutory listing...

What attracted me to the Foresters first time round was the presence of decent traditional cider, not nearly as common as you'd think in West Country pubs back then, and which I'm pleased to say is still a popular feature of the bar today. I also have fond memories of Nelson, the pubs highly vocal (and frequently very rude!) African Grey Parrot. It's that kind of a pub! So if you're easily offended by swearing parrots or enthusiastic cider drinkers (or dogs for that matter, there were a lot of dogs about the place), other pubs and bars are available in the village... 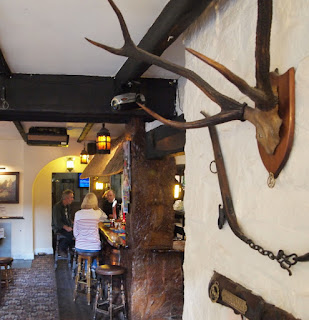 We tried them all on our most recent visit, and I think it's fair to say there's something for (almost) everyone in this busy tourist hotspot, but it was the Foresters that we felt most comfortable in, returning almost every night for the local Cotleigh Brewery beers, and to notch up another game in our traditional holiday Dominoes 'tournament'. A steady trickle of end-of-season tourists like ourselves, and a hardcore of chatty locals all received the same warm welcome from the licensees, a welcome which also extended to that lifeblood of village pubs like the Foresters, the home and away darts teams, who's lively Wednesday night game in the Minehead & District Darts League even silenced Nelson for a short time! 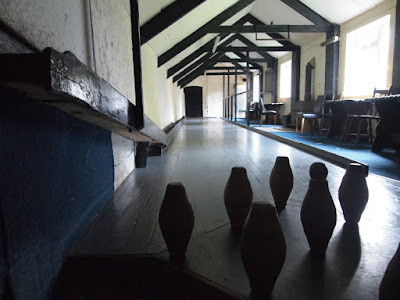 One aspect of the pub that I wasn't previously aware of was the Skittle Alley at the rear of the pub. Skittles is still a very important part of pub-going for locals throughout the West Country, with literally thousands of men and women enjoying fierce and/or friendly competition in hundreds of local leagues. Sadly a great many skittle alleys have been lost to refurbishment and closures in recent years, but the alley at the Foresters is in fine fettle, and host to league play throughout the winter months in the local Dunster League. 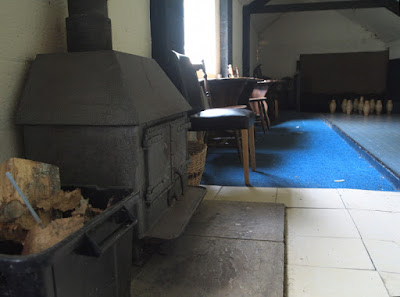 Alley skittles play in much of the country is by necessity confined to the Winter months, for the simple reason that it's easier to get a team up outside of the Summer holiday season. It's therefore not unusual to find alleys like the one at the Foresters, which is entirely separate from the warmth of the pub itself, often come equipped with a heat-source, in this case a substantial wood-burning stove. Skittles players show admirable commitment to the traditions of league play, even through the depths of winter, but an unheated skittle alley might be a game too far for some. 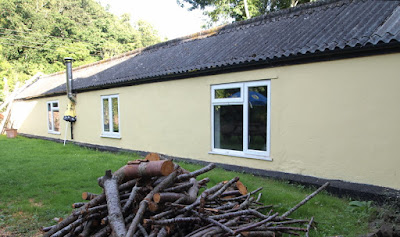 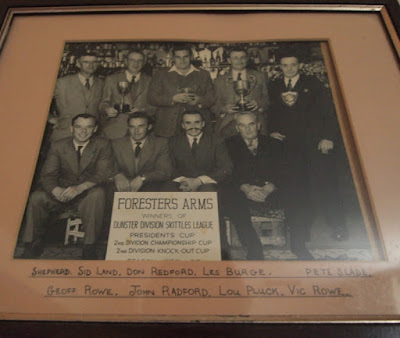 Of course there have been one or two changes at the Foresters in recent years. The now obligatory wooden baton across the delivery-end of the skittle alley is a new-ish addition. An aid to the 'modern' phenomena of the two-handed 'Flop' delivery, developed for accuracy, and small-handed folk like myself who find the heavy Lignum Vitae balls something of a handful. Until recently the alley was fitted-out with four Dartboards for local league play, an indication of just how popular the game was in the area. There's now just the one well-used board in the games area along with a Pool Table. And an African Grey Parrot!

A Shove Ha'penny board went missing from the pub a few years ago, possibly around the same time the swinging pub sign disappeared from it's gantry (the photograph above with the sign intact is from one of my earlier visits). Perhaps it will have returned by the time I visit the Foresters again, though hopefully little else will have changed. There's little need for yet another gastro venue in the village, proper locals pubs like the Foresters Arms are getting ever harder to find. 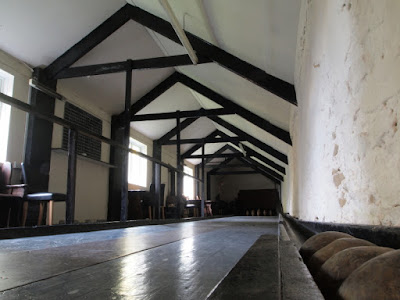 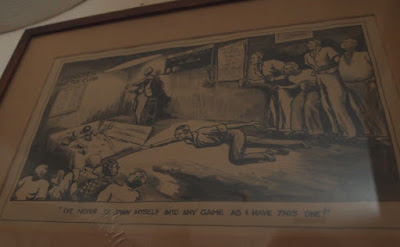 Posted by Mark at 06:50 No comments: Links to this post