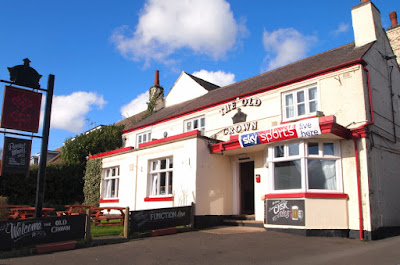 I've had a run of bad luck when out and about with the camera recently, arriving at several pubs with high hopes of great gaming interest, only to come away with nothing but the lingering taste of a slightly rushed pint. Partly it's down to it being that fallow time of year, the gap between Winter and Summer league activity when the pub games have been tidied away. In other cases it's simply that the numerous online resources I rely on for accurate information have not been adequately updated, or at least the all-important gaming aspect has been overlooked yet again. 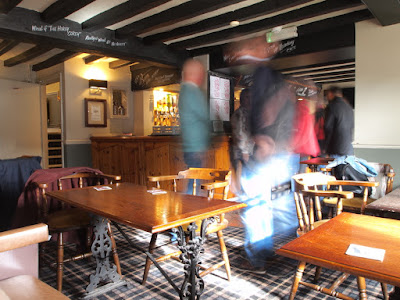 I've also come unstuck on a couple of occasions with that perennial bane of the pub-goers life, the opening hours lottery. Not such a big deal in a town with plenty of alternatives, but a village pub that isn't open when advertised can be a bit of a disaster, particularly if you're using public transport to get there. Less troublesome, though no-less frustrating from my own perspective, is when a pub turns out to be a bit dull, and just not interesting enough to inspire a blog post. A restaurant in all but name with a skittles table shoved away in a corner out of sight, hardly makes a good subject on a blog dedicated to tradition and the pub as 'local'. 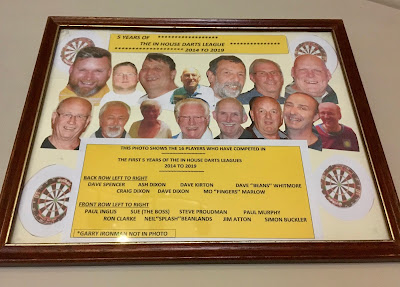 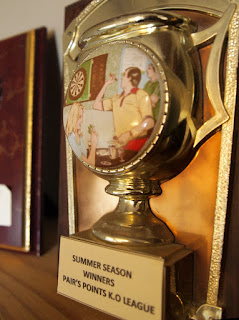 The day was heading that way for all these reasons and more on a recent exploration of the 'skittles zone' south of Leicester, such that I was on the verge of giving it up as a bad job and retiring to the local micropub (little gaming interest, but a guarantee of good beer at least). I decided to try one more pub on the way though, in the hope of third time lucky!...

The Old Crown Inn was already a failed visit from several years ago. On that occasion I'd arrived when the pub was open and buzzing with local life, definitely good material for this blog, but sadly the Skittle Alley I was keen to record was "...a bit of a mess at the moment, the season's over you see...". A great shame as the pub itself is one of the most traditional and relatively unspoilt in Wigston, a proper bar and lounge affair with beamed ceilings and décor just the right side of lived-in/scruffy for my taste. I liked the place. A proper village boozer of the kind I generally prefer to spend my drinking time in, so I aimed to return when the skittle alley was up and running, but obviously never quite got round to it. 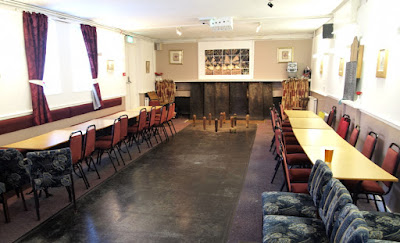 So after an afternoon of disappointments, three cheers for the Crown. Not only open, warm and inviting, and with a decent Saturday afternoon crowd in the lounge, but a good pint too and newish licensees who were happy to show me the skittle alley I'd missed on my last short visit. A major change is the interior, the slightly shabby but pleasant one I'd admired first time around clearly hadn't passed muster with the pubs owners. The lounge in particular has been spruced-up, refurbished for the more discerning customer I guess, though certainly not overdone or spoilt as so many have been in recent years. So still a traditional two-roomer, and still very much a pub for the locals who regard the Crown as an escape from the more lively pubs in the village. 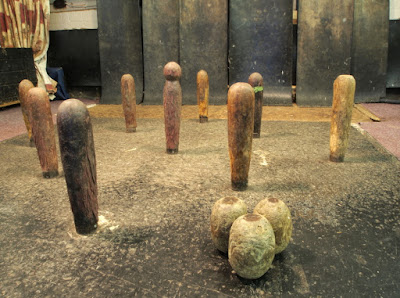 The local history society have suggested that the Old Crown is one of the oldest buildings in Wigston, built perhaps a hundred years before it gets its first mention in an 1846 edition of Whites Directory. There are numerous outbuildings to the rear, all contemporary with the main building, but the Skittle Alley is probably later. Though a relatively 'modern' addition, the skittle alley surface shows enough ware and tear from decades of enthusiastic use to give the impression it could be at least as historic as the pub itself. 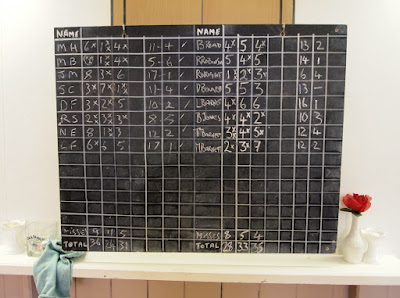 Long Alley Skittles probably developed as an outdoor game in the East Midlands, indeed it remains so at many pubs in Derbyshire and Nottinghamshire, albeit that more and more alleys are being covered over or enclosed to some degree. All the pub and club skittle alleys that I'm aware of in Leicestershire are located in adapted or purpose built buildings, but the twin alleys on the village green at Thrussington in the north of the county couldn't be more outdoors, and perhaps gives us an insight into what may have been more common in the early days of the game. 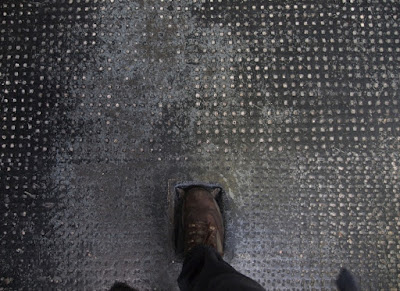 Long Alley is of course a highly skilful game in the hands of experienced players. Nevertheless it represents the most basic form of all the surviving skittles games. For most of its length the 'alley' merely serves to define the distance of the throw, since the 'Cheeses' used in Long Alley are not rolled down the surface, rather they're tossed through the air. So the game can be played just about anywhere so long as there's a hard-standing area for the tall wooden pins, and a clear throw of an appropriate distance.

Long Alley has changed very little over the years, and retains much of the feel of an ad-hoc game played with relatively inexpensive equipment, and in whatever yard or outbuilding was available at or near where beer was drunk. The mottled flooring around the 'chock hole' (above) for example, is a common feature of Leicestershire skittle alleys, most of which are located in separate buildings to the main pub. When delivering a cheese down the alley, the trailing foot must remain in the chock hole until the cheese is released, but this does not preclude launching yourself down the alley immediately afterwards if that helps deliver more speed or accuracy to the throw. Of course frequent trips to the bar on wet evenings could make a smoother surface dangerously slippery, hence this mottled non-slip flooring around the chock hole. 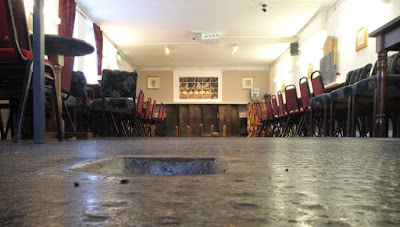 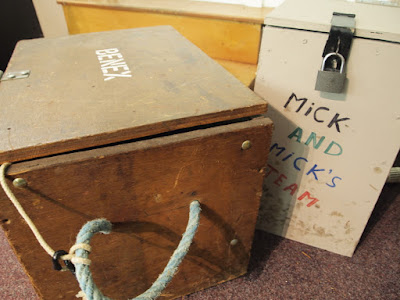 Skittles in Wigston and the wider area of south Leicestershire is played in the Tom Bishop League. The recently concluded Winter League has two divisions, the Premier Division sponsored by local brewers Everards, maintaining a tradition which stretches back many years and was the standard for pub games leagues when most pubs were tied to a local brewery. Brewery owners have always valued the custom that pub games leagues bring, particularly on otherwise quiet weekday evenings. The Barrie Clarke Division is named in memory of a long-standing stalwart of the league. 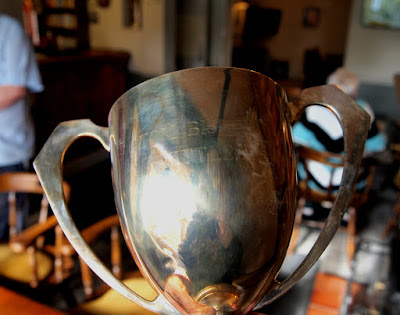 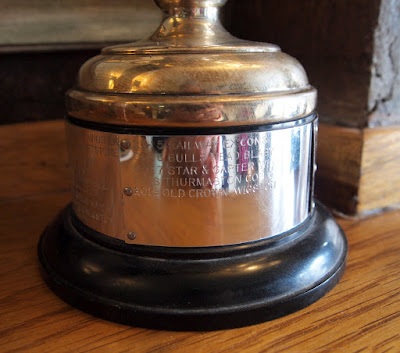 Nicely described how the long alley is played Mark - I'm ashamed to say that on all my not infrequent visits to the Leics/Notts area in the 70's I never got around to seeking out the game.

I’ve played (Leicestershire) Long Alley on occasions for maybe 30 years on socials and the like. It’s only when you see someone experienced in the game that you can see how skilled it can be. There’s an article on the London Skittles website which makes mention of the ‘three dimensional’ nature of their game, which I take to mean it’s not just about the speed and aim. In Long Alley you’re also thinking about putting spin on the ball, or the angle of the cheese, which means you can take out split patterns that would be nigh-on impossible with a simply bowled, albeit accurate ball.