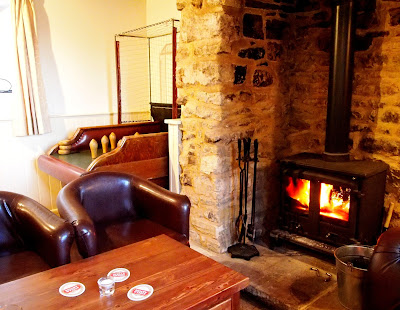 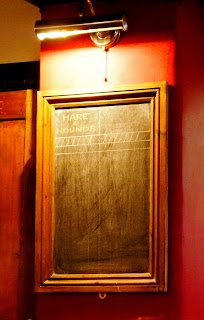 Is this the cosiest Skittles Table in Northamptonshire

This table is located in the refurbished bar of the Hare & Hounds, Great Addington in Northamptonshire. The pub fields both 'A' and 'B' teams in the local Wellingborough & District League. 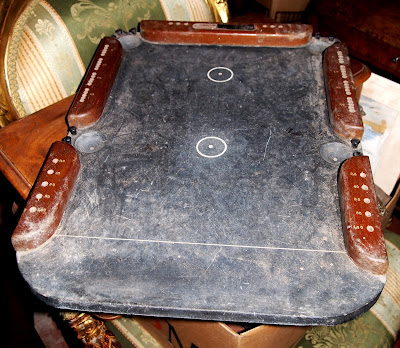 Shuv Billiards anyone? This unusual variation on the traditional pub game of Shove Ha'penny is apparently based on a Billiards table. It's a very weighty piece of slate, and scoring presumably entails 'pocketing' the coins in one of the four depressions on the edges of the board. Exactly how the game progresses once your coin has been shoved into play is unclear. I've certainly never seen one of these before, and have little doubt that I'll probably never see one again! Scores are pegged on the wooden 'cushions' which are numbered in a similar fashion to a traditional Billiards score board. This board was seen in a Norfolk antiques shop, but is unfortunately not for sale. However, the owner has plans to pass it on to his son who is in the licensed trade, so all being well it could end up being played in the pub again sometime soon. 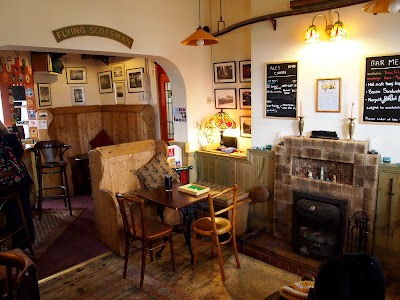 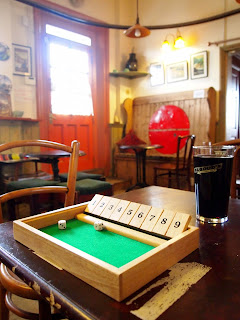 Not many people would put a long wait at a rail station high on their list of good days out, but thanks to old-fashioned buffets like this one at Downham Market in Norfolk, the wait could well end up being better than the journeys end!

The Railway Arms is as cosy a place to wait for a train as you're likely to find, with real ales and traditional ciders to sample, and a small selection of games to while away the time between trains. The games corner includes the traditional pub staples of Cards and Dominoes, plus a Shut The Box, a handy game for the solo traveller.
Posted by Mark at 23:10