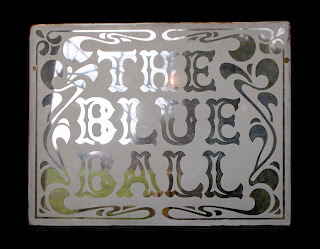 Grantchester could perhaps best be described as an upmarket village located on the edge of an equally upmarket city. For the most part, the village pubs follow suit, all thatch, neat whitewashed exteriors, and plenty of gravel to accommodate the big cars of those drawn to this 'destination' village. I couldn't honestly tell you what most of the pubs are like inside, the lure of a more down to earth boozer drew me in on a cold Winter day.

The Blue Ball Inn is a lovely little pub located on the edge of the village. Snuggled into the centre of a row of cottages, a rural gem overlooking ploughed fields, yet only a short bus ride from the centre of town. Once you're there, you won't want to leave in a hurry that's for sure. Good beer, an open fire, a pub for conversation and conviviality. There are also plenty of amusements to keep you occupied should you choose to stay for a few leisurely pints. 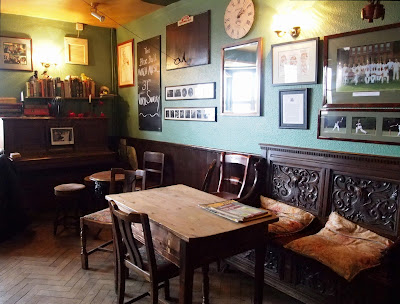 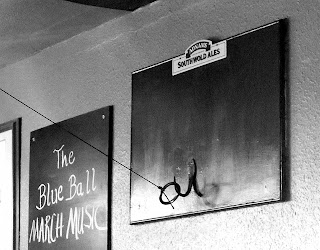 The games played at the Blue Ball are practically part of the furniture. Pride of place, and a real rarity to boot is the Ring The Bull, possibly the simplest of all pub games to play, yet one of the hardest to master. An annual 'World Championship' is contested at the pub in April, though should you fancy your chances it's worth pointing out that home advantage counts for everything in this game.

If Ring The Bull is one of the simplest pub games, then Shove Ha'penny is certainly one of the oldest. The original version was played on extremely long wooden tables, highly polished to give minimum resistance to a metal 'puck' slid along its length. The more modern game developed as a compact, slightly more sophisticated version, easily accommodated and played in even the smallest beer house or tavern. The board at the Blue Ball is a nice old polished Mahogany one, the dark timber blending nicely with the surroundings of a bar considered sufficiently unspoilt to be listed on CAMRA's list of Heritage Pubs. 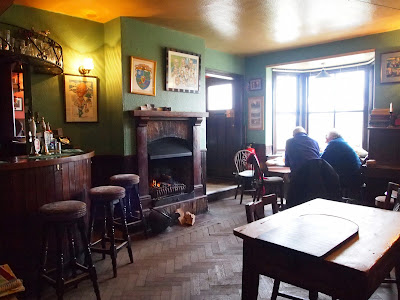 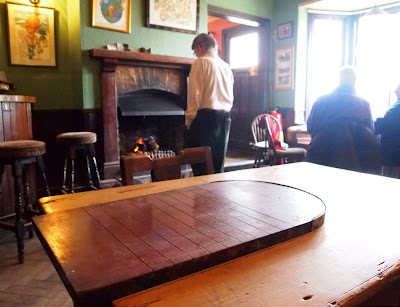 Chess is a game well suited to a pub like the Blue Ball. Another game which the licensee looked long and hard at installing was a Bar Billiards table, but despite much scratching of head and careful measurement, he concluded there was insufficient space for the game in either of the bar areas. 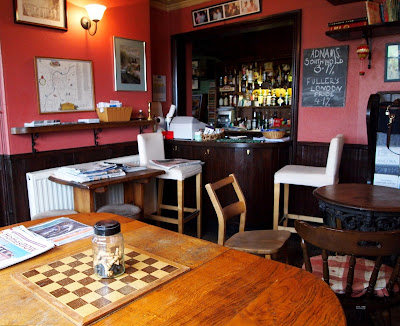 * Please Note: For clarity I've reversed the frosted glass image above, which read backwards from inside the pub.
Posted by Mark at 23:30