Daddlums (and other Rare Skittle Games) 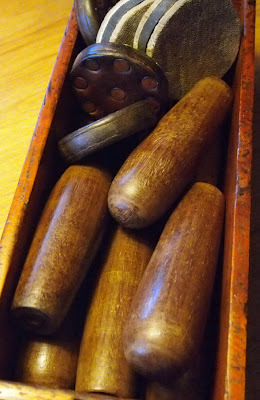 For all the wide variety of games still played at the pub, it's probably true to say that just as many have all but disappeared in recent years. Some games which would once have been very popular, albeit played quite locally, are now very scarce indeed, and others have sadly disappeared entirely. And yet just because a traditional game has vanished from the pub in recent times, it doesn't necessarily mean it's gone for good.

Certainly examples of scarce or long-lost pub games do occasionally resurface, usually via the antiques and collectables trade. Suffolk Quoits boards are a case in point, now effectively extinct as a pub game it nevertheless seems that many of these simple games boards have survived.

With pub closures running at an all time high, it's inevitable that old games, perhaps even rare or hitherto undiscovered ones, will once again see the light of day, rescued from the dank cellars and dusty store rooms of old pubs where they've languished un-played and unloved for many years. My understanding is that this is how the Skittles & Cheeses shown here have come to light, discovered recently at an as yet unknown closed pub in the small Lincolnshire town of Grantham. 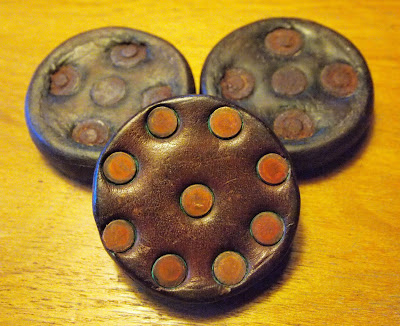 These skittles and cheeses superficially resemble the game of Northamptonshire Table Skittles (sometimes known as Hood Skittles), though there are a number of features which set them apart from this game, most notably their significantly smaller size. Unlike most of the larger forms of the game of skittles, where a ball (or barrel shaped 'cheese') is thrown or bowled at the pins, Table Skittles developed as a compact bar-room game, with thick, flat discs of wood replacing the balls. These are thrown onto a padded leather table where nine stout boxwood or hardwood pins are arranged in the traditional diamond pattern.

A slightly smaller version of this game, known locally as Daddlums, was once played in Kent and the surrounding counties. Only one original Daddlums table is known to be in existence now, located at the recently re-opened Vigo Inn, Fairseat in Kent (there is a photograph of the table on the pub website). The local branch of the Campaign for Real Ale also have an original set of pins and cheeses, and stage occasional Daddlums matches on a reproduction table (see this edition of Channel Draught from page 40 for a good description of the game, and how the branch came to own the pins and cheeses). The game seems to have been quite popular right through until the late 70's, in fact I've spoken with a gentleman from the area who remembers playing the game at a pub in the village of Trottiscliffe around this time, which suggests that most pubs in this area would have had a table in the games heyday.

A very similar game to Daddlums extended up the eastern seaboard to Norfolk (and possibly beyond!). Sadly, since the last known Norfolk Skittles Table disappeared from the Horseshoes Inn, Alby, no example of the Norfolk game has been seen for some time. A photograph of this table can be seen in Timothy Finn's 1975 book Pub Games of England. One thing is clear though, given the popularity of these games, it seems certain that more tables, pins, and cheeses are waiting to be discovered in the area. It's also quite possible that given the relatively wide spread of such similar games, a small table skittles game like Daddlums may have been played much farther afield than has previously been thought.

Which brings me to the skittles and cheeses shown here, and what little I currently know about them: 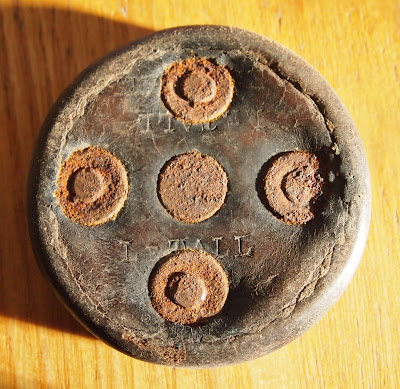 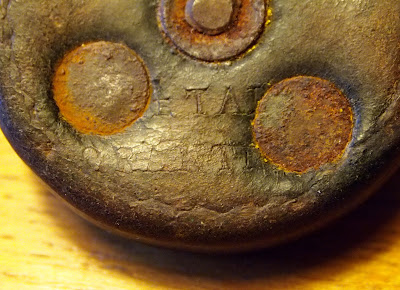 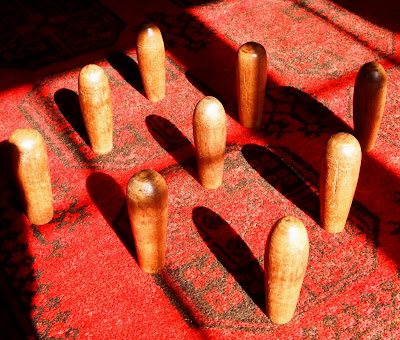 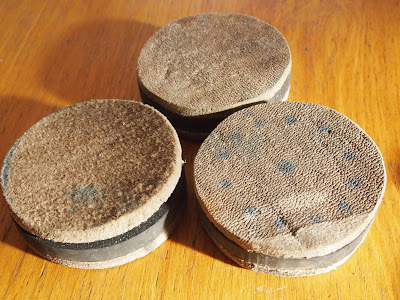 What conclusions can be drawn about this highly unusual skittle set? The fact is that buying items like these from a dealer in a particular location is no indication of origin, although I am led to believe they did come from a closed pub in Grantham. More compelling as an indicator of origin is the name and (presumably) location stamped on two of the cheeses. Le Tall seems to be a family name with some connection to Lincolnshire.

The construction and materials used to make these cheeses strongly suggests that this was a pub skittle set. A parlour game would certainly not have needed to be so robust, particularly with regard to the rivets which would have been a liability in a home environment. The skittles themselves are similar in size to those used in Daddlums and Norfolk Skittles, and significantly larger than Devil Amongst The Tailors pins.

So, this appears to have been a local Grantham pub game, probably played on a table similar to that used for the game of Daddlums, and possibly representing a far-flung example of a game once played throughout the South-East of England, and extending up the Eastern coastal counties at least as far as Lincolnshire.

I hope to be able to find out a little more about this skittle set in the near future, and would like to construct a table for their play at some point, probably based on the Norfolk Skittles table featured in Timothy Finn's book, unless I can find evidence of an original Grantham model in the future.
Posted by Mark at 08:53

I've just checked the details of the 'Vigo Inn' and it would appear that it is now permanently closed.

Yes, I read in the local CAMRA publication that it was gone, but the Daddlums table has apparently been removed for safe keeping so will hopefully reappear one day.

Daddnums is played at The Jolly Drayman in Gravesend on Sunday nights which is pretty close to Vigo. I'm not sure if it's an original table but some of the regulars have been playing for 40 years

Thanks for that Richard. I was tipped off about the Jolly Drayman table a year or two ago by a blogger who sent me photos of it, but as yet I've not managed to get down and see it in action. Looks an old leather padded table to me.

Yep it is an old leather padded table, I'll find out how old when I play next. Generally it's 8:30 for a 9:00pm start, the beer and company are good so it's worth popping along. I've not been playing long but I'm hooked, it's a fiendishly difficult game

Thanks for that George, that's the first time I've seen the pins on this table. Still looking to get down for a chuck at some point.

Just making a set of cheeses from leather, riveted in a similar way. They weigh in at about 50g which is lighter compared with other wooden ones I've made. I've experimented, playing with them on some slightly differing versions of the Dorset version of daddlums (Drubbers) with different models of pins, and they play well, and are definitely quieter. Quite a bit of work involved in making them them for an amateur (novice!) leather worker as myself.