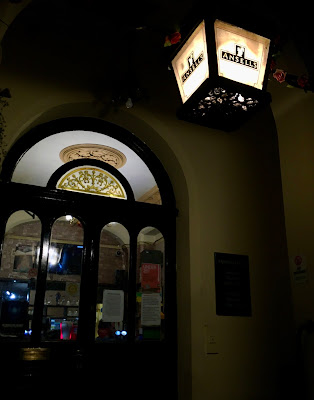 Classic 'modern' estate pubs like the Northway Arms don't as a rule feature heavily on beer blogs, and with one or two notable exceptions, rarely make much of an impression on pub blogs either. Indeed why would they! These pubs are neither fish nor fowl in the world of blogging, more often than not tied to a very limited beer range, and not usually regarded as being historically or architecturally important. It's one of the reasons I'm keen to feature them on this blog, because they really are a neglected subject both online and in print such that it can be quite difficult to research their origins or near past. Another reason being that we've lost so many of these boozers in recent years, often leaving little or no trace that they ever existed.

In many ways, those post-war and early 20th century estate pubs that do survive (as well as trades and social clubs) represent a last link to how all community locals would have been at one time, and how many still were in the mid-80's when I first started drinking in them. Pubs that served a multitude of social functions for a largely local clientele, and where the range of beers, whilst it may have had some bearing on which pubs you and your mates preferred, played second fiddle to who you were meeting up with that night, or what gaming and entertainment might be on. As the only pub on quite a large estate that's neither bustling town nor rural village destination, the Northway Arms simply has to fulfil this varied and inclusive social function if it's to thrive. 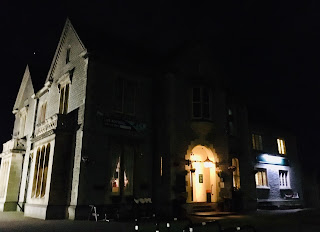 Of course estate pubs have always had a limited appeal to the beer enthusiast. Particularly given that many were established during the infamous rush to keg of the 1960's, and were probably regarded as unsuitable outlets for the nascent real ale revival that followed in its wake. The Northway certainly had a cask beer from the Allied stable of breweries in the mid 90's, and may well have done when the pub first opened its doors in the 60's or 70's, but sadly the handpumps are now long gone.

It's also true that many estate pubs are regarded (often by those who don't actually use them!) as being slightly less than attractive as social venues. There's some truth in this of course. Until relatively recently, estate pubs have been largely ignored by their pubco owners when it comes to the annual refurbishment budget, the spending more often targeted at high-earning food outlets, city-centre bars, and rural tourist destinations. As a result many of these buildings have been in steady decline almost since the day they were built. Never particularly attractive to non-locals anyway, but getting ever more tired and unloved over the years until the axe finally falls on what were once very popular pubs that even the locals have fallen out of love with. Neighbourhood supermarkets in residential areas mark the passing of many of these sadly neglected boozers. 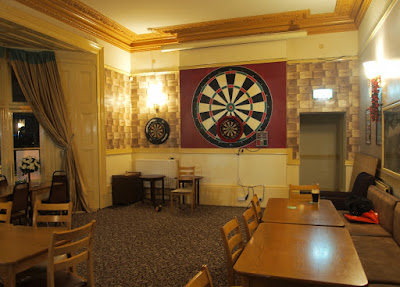 Over the last couple of years though I've noticed welcome signs of change, and visited several recently refurbished estate pubs that are finally being given a second chance by their owners in the hope of re-establishing them at the heart of the communities they serve. The Northway falls very-much into this category. The pub has received a comprehensive makeover in recent years that fully respects the buildings historic origins as a Manor House in the original Northway hamlet. It's immaculate inside and out, retains a multi-room layout, and is a credit to the current licensees who've been very proactive with regard to functions, events, and charitable fundraising within the local community throughout the last 7 years of their tenancy. 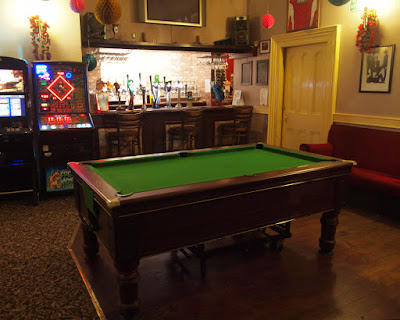 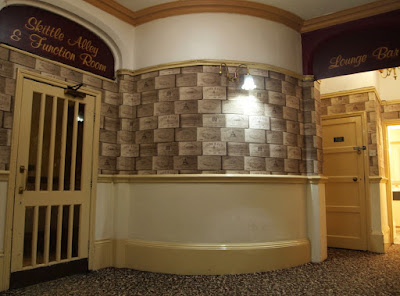 Whilst the Northway is undoubtedly a very fine pub in my view, it's not, if I'm absolutely honest, a pub I'd be going out of my way to drink in under normal circumstances. I think it's safe to say that this is very much a local pub, primarily serving the needs of locals on the Northway estate. Not so much a destination pub for a tourist on his way back from a long day out in Worcester, though the fact that the pub also functions as a handy waiting room for the Ashchurch rail station goes some way to explaining why I found myself in the bar, Guinness in hand, late on a Saturday night. Now I'd certainly had a few beers that day, but then so it seems had the locals. A lively but friendly bunch as you'd expect on a Saturday night. The banter was a little bit coarse it's true, you either like that or you don't. I'm fine with it and I think they were fine with me as a result. 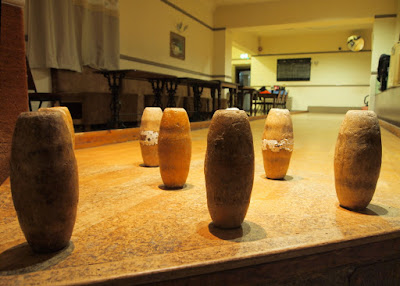 Of course the main reason I was happy to pop in for a pint was that the Northway is an important venue in the local Tewkesbury & District Skittles League, and I have to thank the barman who was on that night for happily opening up the skittle alley for me when I'm sure he had far better things to do. 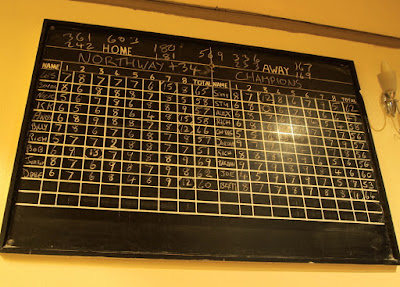 Gloucestershire remains a stronghold for the 'West Country' skittles tradition, with leagues centred on most of the bigger towns, albeit that the Tewkesbury League is certainly not what it was. Whilst the league seems to be well supported, currently stretching to four divisions of over fifty teams, venues continue to be lost. This years devastating floods in the Severn region seem to have finally done for the White Bear in Tewkesbury itself, the licensees finally throwing in the towel after several years of repeated and highly damaging flooding (though I have heard rumours of a possible reprise since I visited). The pub was up for sale when I popped down for a look, it's future very far from certain, and of course this includes its very fine skittle alley, the last remaining alley at a pub in Tewkesbury itself. 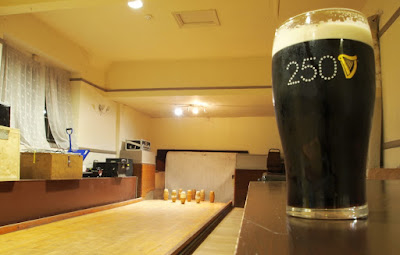 Which makes surviving pubs like the Northway all the more precious. Because classic estate pubs are not only a last link to what some of us regard as a golden age of social pub-going, but often they're the last custodians of a social gaming tradition every bit as important as beer and brewing, the subject of which seems to dominate the pub scene now to a wholly disproportionate degree in my view.

As I write this, the Northway Arms is of course closed along with all other pubs during the current national lockdown. The pub is still serving the community however, acting as a collection point for food and other important supplies, helping provide a lifeline for self-isolating individuals and other vulnerable people within the Northway area. 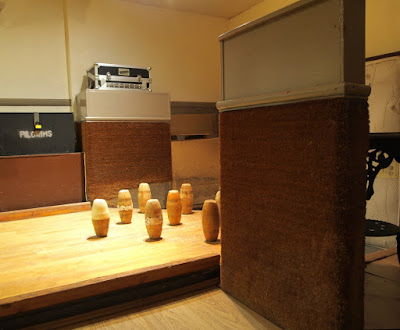