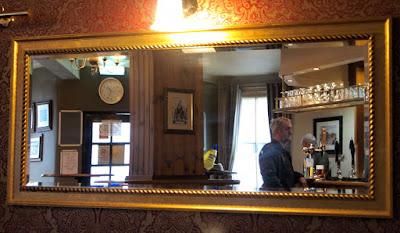 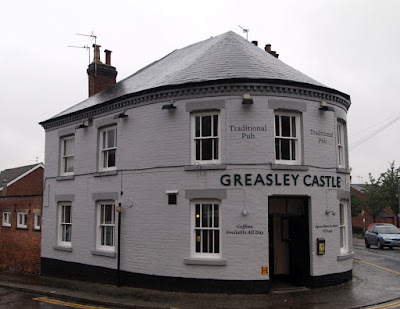 This was originally going to be a 'before-and-after' post on the Greasley Castle. As it stand it's merely the 'before' that you see here, the 'after' will have to wait until the travel restrictions we're all labouring under are lifted and I can finally return to Eastwood. These photographs were taken almost a year ago as part of an exploration of pubs in the Eastwood area, taking advantage of travel on the Trent Barton Rainbow 1 bus route on a rainy midweek afternoon. There's a lot to explore on this popular route because the whole area is very well pubbed, many of which are very good pubs indeed. Needless to say I didn't manage even the half of it that day, and have been looking for an opportunity to revisit the area ever since... 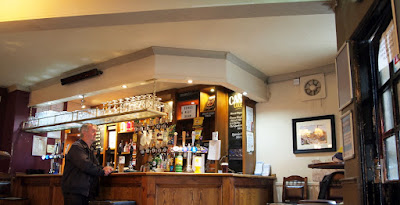 The Greasley Castle pub is itself unfinished business for me. When I popped in for a pint and a chat with the landlord that day it was clear that things were about to change at the pub, and change for the better I was assured. So the pub that you see here, whilst certainly attractive and traditional enough (certainly for my tastes), was perhaps not showing at its best after several years in the hands of a locally unpopular national pubco. In an area that's now regarded as something of a beery destination by those in the know, literally awash with new-ish micropubs as well as some very highly regarded traditional older boozers, the Greasley Castle had perhaps fallen behind some of the local competition. Enter Derbyshire pub chain the Pub People Co, who have good form revitalising pubs like this in the Derby and Notts area. As it happens, the pub was due to close for a welcome refurbishment within days of my visit. 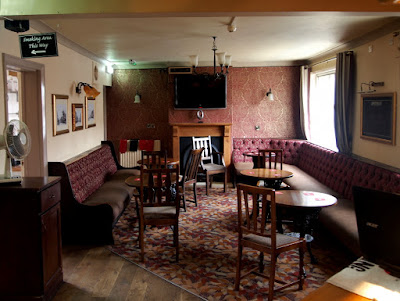 The Greasley Castle is one of many Hardys & Hansons pubs in the area that subsequently passed into the hands of Greene King following the unfortunate family sell-out. The painting below, which hopefully still hangs on the wall of the bar, shows the pub in its former 'Kimberley Ales' livery, a common sight throughout the area given Eastwoods close proximity to the now closed brewery. This was 'Kimberley Country' back then, and the traditional dark Mild and refreshing Bitter were popular with local drinkers in a way that some of the replacements from Bury St Edmunds don't seem to be, which probably explains why the Greasley Castle has always served local guest beers, including longstanding Derby and Midlands favourite Draught Bass. 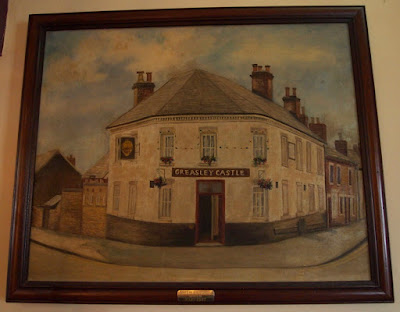 What was probably a multi-room pub in its original guise has been opened out over the years to form a single room, albeit retaining three distinct areas. The larger bar area is clearly the social hub of the pub, the place to prop up the bar and chew the fat over a pint, but there's also a cosy lounge/snug to the rear (above), and a smaller tile-floored area that was home to the pubs Dartboard when I visited. Televised sport is clearly very important at a pub like the Greasley Castle, but so too are traditional pub games, as evidenced by the shelf-full of plaques and trophies for that most traditional of pub games, Dominoes. 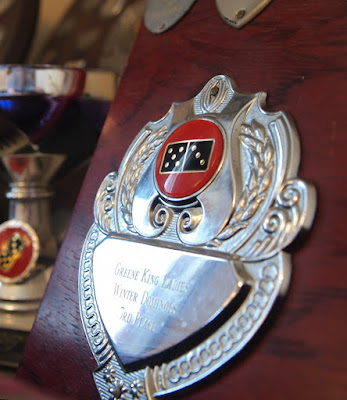 It's not at all clear at this time whether the Wednesday 5' & 3's Domino session is still going strong at the pub, or indeed whether the Darts throw has survived this most recent refurbishment. All of which I'm keen to discover on a future visit whenever that might be. One other thing I'm particularly keen to explore is the newly spruced-up patio to the rear of the pub, because the Greasley Castle, in common with many community locals in this neck of the woods, was once a pub for the local Nottinghamshire and Derbyshire game of Long Alley Skittles. The pubs outdoor skittle alley was certainly still in situ at the time of my visit, though sadly not in any state to be viewed or photographed. It may still be there underneath the garden furniture, so I'm keen to record its existence even if it may never see action in a game of skittles again. 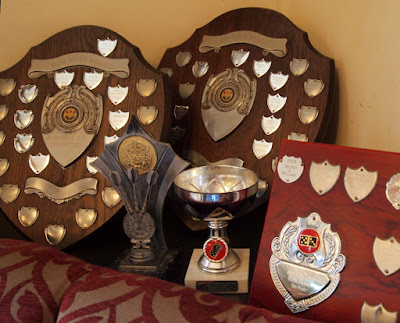 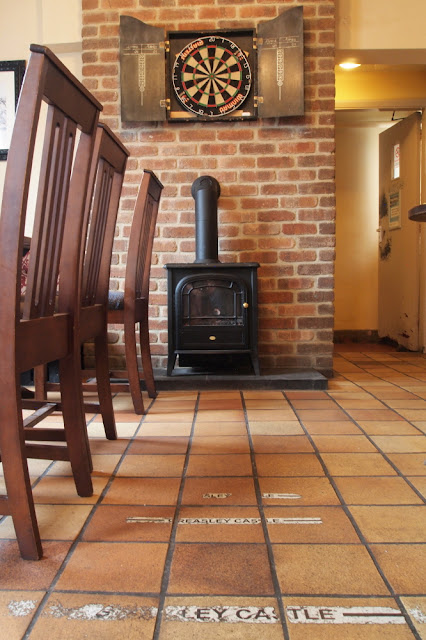 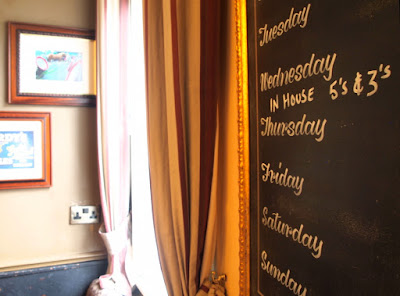 Can only be down to the competition round there, it must be tempting for the local branch to just shovel all the micropubs in, even if that means nowhere open Mon-Wed. The New Inn at Heanor is similarly curtailed mid-post due to this lockdown. A terrific skittles pub with a great trad bar that was just too busy to photograph properly.

I've been to this one!!!
I thought it stood out nicely amongst all the micropubs and the pub was smart enough both outside and inside, but still looked similar to the pictures you have posted.
Decent bit of Bass on if I recall too.
I'm not quite as adept as you at spotting pub games but couldn't see any signs of a skittle alley!

I remember reading that one Beermat. It would be too easy to just do the micropubs around Eastwood so it’s great to see posts on the more traditional boozers. There’s often not much to see in Notts Long Alley, particularly if the alley is no longer used. Just a metal frame for the pins and maybe the chock hole marking the throw. It’s possible the Greasley Castle alley may have disappeared under decking by now but I’m keen to have a look.