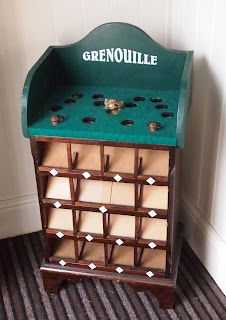 The first sight to greet you at the front entrance of the Brunswick Arms is this unusual timber construction, a coin tossing game called  Grenuoille, more commonly found in French or Belgian bars. Lovingly homemade by the licensee, it's just one of the dozens of traditional pub and bar games which form licensee Chris Hankins extensive collection.

The Brunswick is a kind of one-stop-shop for traditional pub games. The collection includes just about every game you can think of, including the once popular local game of Indoor Quoits or Dobbers, as well as more common examples such as Shove Ha'penny and Shut The Box. The thing about the Brunswick is that these games are not just for show. Chris is keen for all the games in his collection to be played and enjoyed by his customers, and like myself, sees games as an important part of the social pub-going experience.

Total games immersion includes the twice monthly meeting of the local Subbuteo Club at the pub. 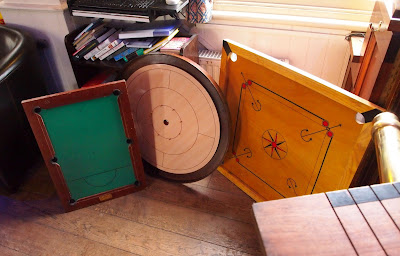 From right:  A rare and unusual Shove Snooker board. The Canadian game of Crokinole. A Carrom table, Asian in origin. A nice Mahogany Shove Ha'penny (see below). 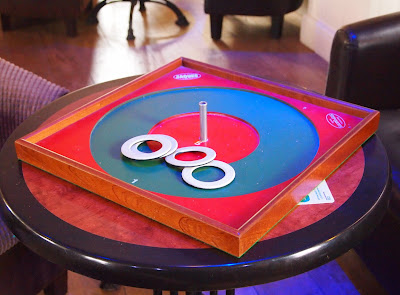 The Quoits Board is a Jaques model, including the floppy rubber quoits, white on one side, which are traditional to the game. The other ring-flinging game at the Brunswick is the Rings Board shown below. This is the standard 13 hook design as played in Ireland. The game was once quite widely played in England, particularly in the north, but is now only rarely seen outside of the Isle of Wight where the game is still played in the Ventnor & District Rings League. 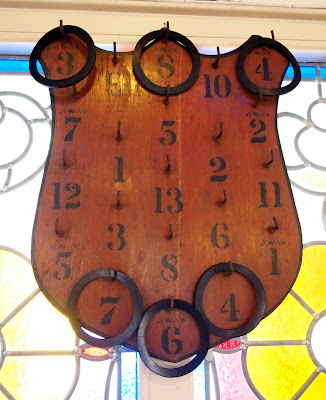 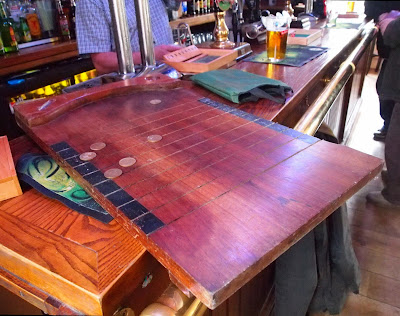 The Shove Ha'penny is a good quality board with brass lifters. Note that the bar comes equipped with several Shut The Box games, and a Put & Take is also available, though presumably not for the purposes of gambling! Even a humble formica-topped table has been converted to a Shove Ha'penny at the Brunswick. 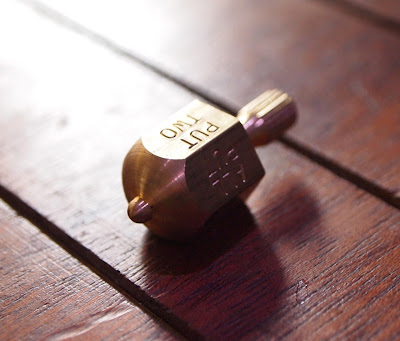 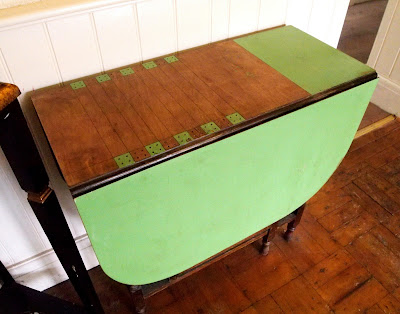 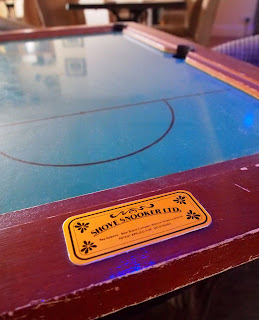 The 'Shoving' format of pub games spawned many different games during its heyday, most of which have now effectively disappeared, not only from pubs but more generally. I've already featured a slate Shuv Billiards game on here, and I've also seen a Cricket version as well as many variations on the theme of propelling coins up a smooth surface.

This Shove Snooker game would presumably have involved 'flicking' coins rather than shoving, but like many of these unusual and largely obsolete variants, the rules are very hard to come by, so there will always be a certain amount of guess work involved when it comes to how it was played. One thing's for sure, I can't see a full set of snooker balls being represented on a board of this size. 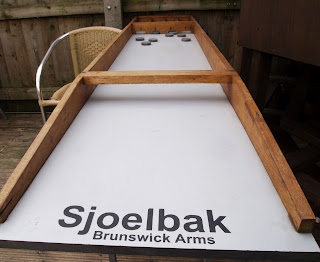 The Dutch game of Sjoelbak is located in the garden of the pub, and gets well used on warmer days apparently. The idea is to slide wooden 'pucks' up the board, scoring by getting them to slide through the four numbered slots at the top of the table.
Posted by Mark at 10:29

The shove snooker board was made in Liverpool. The counters are about the size of a five pence coin but twice as thick with a metal backing to allow them to slide across the board. There are 15 red. 7 yellow. 3 white. 1 brown. 1 green and 1 black.
I am not sure how many counters there should be also the base of the board has a turntable attached, much like the latest scrabble boards.
This was bought for my sons in the 80s but no rules were provided so they soon lost interest.

Thanks for that Chris. Did you see the Shuv Billiards game a dealer in Cambridgeshire wouldn't sell to me!! Who knows where you'd find the rules for these things.

Hi there, I missed one of the colours off my list above there is also 1 Blue.