The Eastgate side of Gloucester has probably seen more than its fair share of pub closures in recent years, and taking a walk along Barton Street it's easy to see why. Most large towns have at least one area where immigrants have tended to gravitate towards and settle, and for Gloucester the high density Victorian terraced housing of the Barton Street area is certainly one such area. Successive arrivals since the war years have contributed to a wide, and for most of us welcome cultural mix in these areas, but it's perhaps inevitable when many of those who have settled are non-drinkers, or simply not accustomed to Britain's unique traditional pub culture, that the local pub trade is going to suffer as a result. 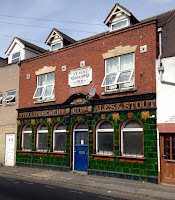 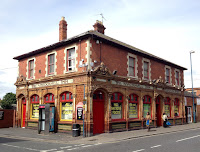 The Barton Street area has two well-known examples of pubs which have found themselves surplus to requirements largely as a result of local demographic change. The Vauxhall Inn (left) and nearby Robin Hood Inn (right) remain truly great examples of Victorian opulent pub design and decor, yet both have sadly been closed for decades now. Both have been turned to alternate use, undoubtedly never to serve as pubs again, and only the impressive glazed tile exteriors and signage remind us that these buildings would once have been flagship pubs for their respective brewery owners, and great traditional boozers for their locals. 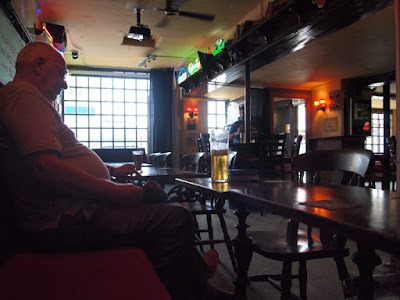 The first time I visited this part of Gloucester some 20 or so years ago, both of these classic urban locals were already long since closed, but the nearby India House pub was still very much open. This too has now closed, so the only notable survivors in the area are the Plough Inn, a backstreet boozer which has already featured on this blog, and One Eyed Jacks on Barton Street itself.

One Eyed Jacks is the kind of pub that many, myself included, may well have walked past without actually considering stepping over the threshold for a drink. A pub with something of the look of an Irish sports themed bar from the front, a style probably not to everyone's taste it must be said. The interior is similarly themed, decorated with items of faux Victoriana and the odd neon advertising sign. But if you do decide to step inside for a pint as I did, you'll also find that this is a well-run, beautifully maintained, and popular locals pub. A pub where I was made very welcome by both the licensee and the chatty lunchtime locals. 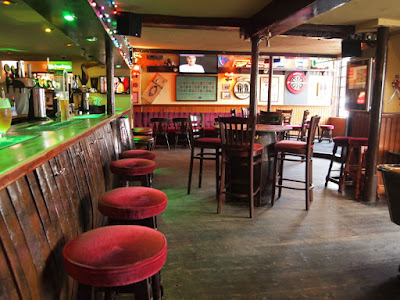 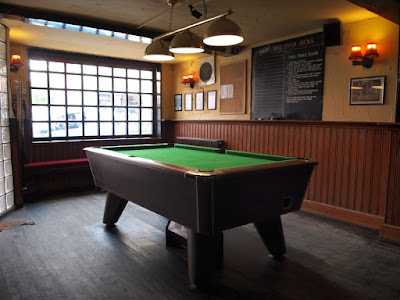 On entering the pub, it's immediately apparent just how important sports and traditional pub games are to the appeal of One Eyed Jacks. A Pool Table dominates the front bar area, and there's a well-used Dartboard tucked around the corner. Bench seating and tables run along the right-hand side of the front bar, which is perhaps the most 'pubby' part of the two main drinking areas, and where the locals like to sit and chat. Darts and Pool are still probably the most popular games played at league level in the pubs of Gloucester, but Skittles must come a very close third. 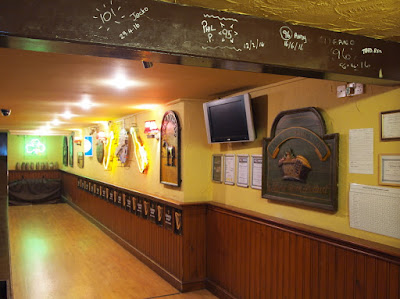 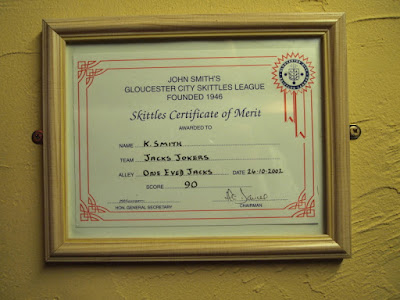 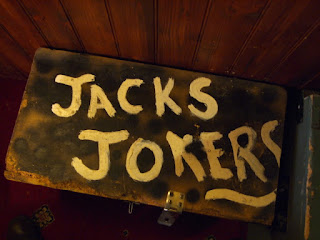 I don't know whether One Eyed Jacks would have had a skittle alley in its former incarnations as the Victoria or Molly Malone's, but it's clear from the assorted certificates and alley records on show that skittles has been hugely important to the success of the pub for at least the last few decades, and at a time when many similar locals have struggled. 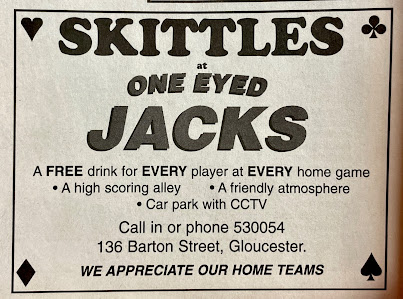 Teams compete at One Eyed Jacks in the Gloucester City Skittles League, and every Sunday there's also an informal knockout tournament, a tradition which I've noticed is common to skittles pubs throughout the country. 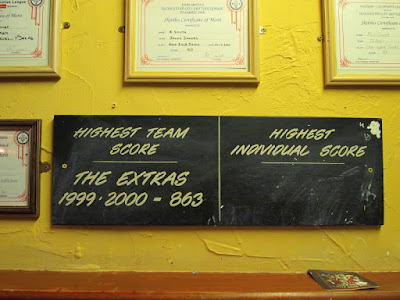 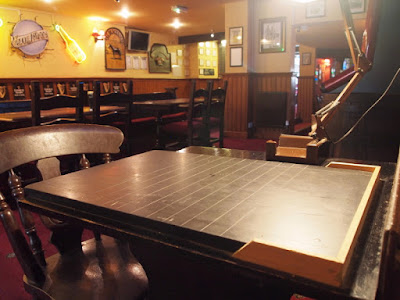 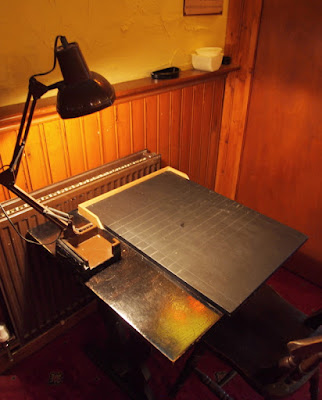 I can only imagine that the game of Shove Ha'penny must have been popular enough in Gloucester at some point to have warranted a league. Whilst there are still a good few Shove Ha'penny boards about in pubs throughout England and Wales, it's quite unusual to find a match quality board set up in the bar, polished and ready for play. In Gloucester there are good slate Shove Ha'penny boards at the nearby Plough, and a similar board tucked away at the rear of One Eyed Jacks. Both these boards are set up permanently for play, and come complete with their own anglepoise 'floodlighting' for when the game gets serious. 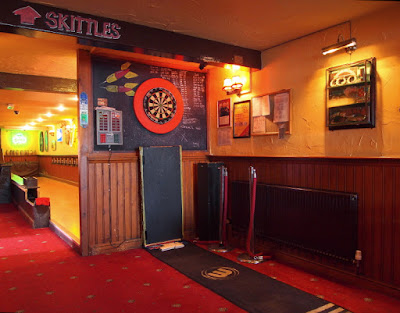 An interesting survey of the area Mark - one not at all familiar to myself or contemporaries. I was amazed at the high scoring on the skittle alley. I don't know the number of players in a team or number of hands played but I think it must be more on both counts, than in the average Somerset league.