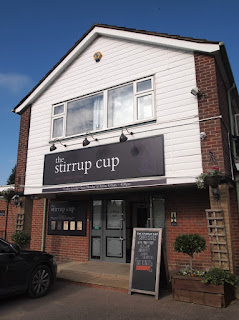 The Stirrup Cup pub in the Northamptonshire village of Barton Seagrave has been on my 'to-do' list for a few years now. Somewhat remiss of me as it's little more than a twenty minute drive away and I'm not exactly a stranger to the pubs of Kettering. Of course The Stirrup Cup is not actually in Kettering, though I have to admit I've been labouring under that misapprehension for some time now. That's because the Stirrup Cup is a classic 1960's estate pub, and the old heart of Kettering town is surrounded by post-war private and social housing on all sides. Indeed Barton Seagrave only retains its unique village identity by dint of it's proximity to Wicksteed Park which acts as a greenbelt between the village and the edge of Ketterings modern-day sprawl.

Given that most of this massive housing expansion around Kettering occurred in the 60's, it's no surprise that each new estate came furnished with a shiny new-build community pub. What's slightly unusual about Barton Seagrave is that whatever pub the old village may have had prior to the building of the new estate, it's clearly didn't survive, making this modern estate pub the sole village hostelry.
﻿
Built in 1964 as part of a new private housing estate that would hugely expand the old ironstone village. Originally branded a 'Phipps House', though even then the pub would have been in the hands of the mighty Watney Mann empire who would soon-enough close and demolish both the Northampton breweries, and re-badge most of the estate as Mann's houses (the Mann's Brewery 'George & Dragon' logo was common on pubs throughout Northamptonshire until quite recently). 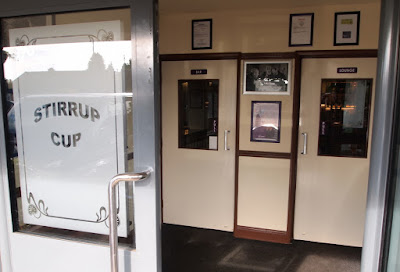 As was the norm in those days, the Stirrup Cup was built as a two-room pub, the Public Bar to the right and a slightly larger Saloon Bar through the left-hand door. I'm pleased to say this layout remains largely unchanged, though the games and sport oriented Public Bar is now in the larger left-hand side of the pub, a necessary step given the huge popularity of both pastimes at the pub. 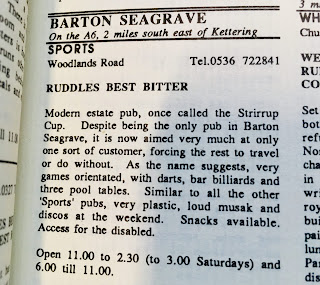 The Stirrup Cup seems to have always had a major sporting and games theme, even to the point of being renamed 'Sports' in the 90's when this local CAMRA pub guide (left) was published. Whoever surveyed the pub was clearly scathing of this incarnation, which may seem surprising given that sports themed pubs like this are arguably more 'pubby' than many of their food and beer oriented contemporaries. I think this attitude can be explained by the long editorial which prefaces the guide proper. An editorial that rails against 'theming' of any kind, favouring pubs that have something for everyone rather than specialising, sometimes to the exclusion of one group or another. This even includes, and this is perhaps even more surprising in a CAMRA publication, the burgeoning phenomena of 'beer palaces'!
﻿﻿﻿﻿﻿﻿﻿﻿ 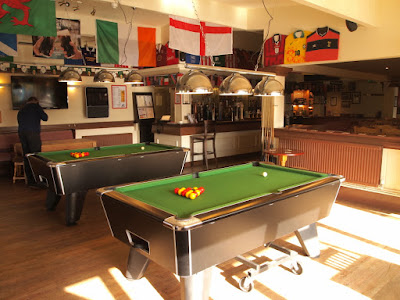 Which brings me to the Stirrup Cup of today. Beautifully maintained, and on the face of it little changed. The Public Bar remains the busy evening and weekend hub of the pub, boasting all the televised sport, a pair of Pool Tables, Dartboard, Table Football and Skittles Table, with teams in all of these barring the Table Football. So still very much specialising in sport and games, but that's only half the story.

Under the current management the food trade has become crucial to the ongoing success of the Stirrup Cup, with the lounge now trading throughout the afternoon as a smart Coffee Lounge. This additional community asset was busy with customers when I visited on a Wednesday afternoon, an otherwise slow weekday session for most pubs. The Stirrup Cup has a good reputation for its food, is more family-oriented with a well-used garden to the side, and has been well and truly returned to the heart of the local community. Even the beer range is much improved, the pub now operating with a free of tie option which means they can offer beers from some of the best local breweries, I had something from Oakham Ales whilst taking these photos. I don't usually take much notice of the straplines on business websites, but the one on the Stirrup Cup homepage seems to me to sums the pub up nicely. 'Family - Sports - Local'.

If only all estate pubs were as good as this... 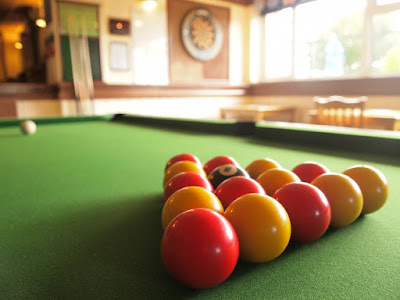 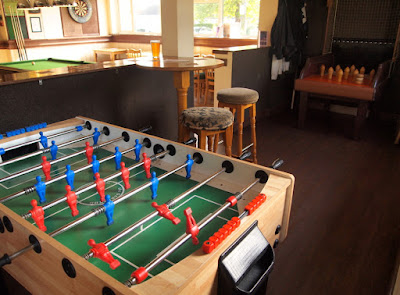 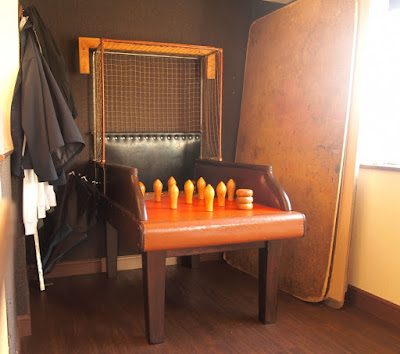 Of course the main reason I've wanted to visit the Stirrup Cup for so long is the hugely important games interest, and particularly the local speciality, Northamptonshire Table Skittles. Skittles is still popular in and around Kettering, and none more so than at estate pubs like the Stirrup Cup which remain the bedrock of so many pub games leagues. The home team recently 'chucked-off' in Division Four of the Kettering, Burton Latimer & District Skittles League, and will I imagine be hoping for a slightly better finish than the lowly 7th place they achieved in Division D of the recently finished Summer League. 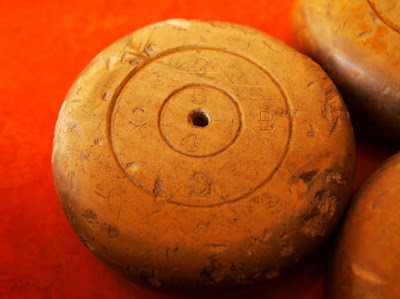 They've certainly got the table for it, a very fine Pepper's Skittles Table, only recently refurbished by the local expert in the field, Colin Swinfen of Kilworth. A Pepper table can be distinguished from the more common W.T Black & Son models by the less curvy sides, and the netting which is a straight-up boxed design rather than the sloping net of a Blacks table. Unlike the Blacks models, these Pepper Bros Skittles Tables tend to have little in the way of information secreted about them, making a table like this quite difficult to date. 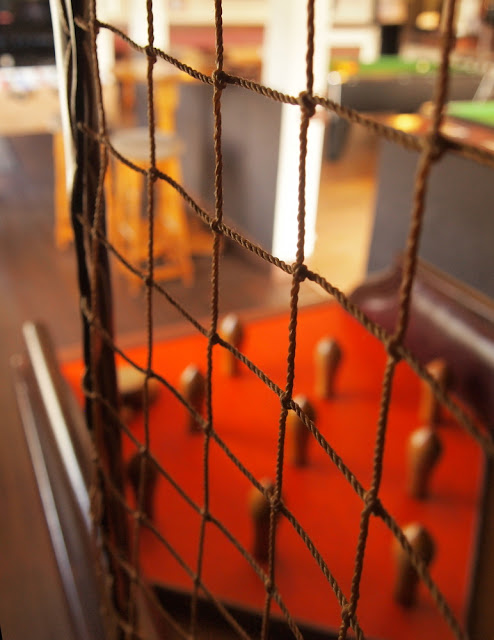 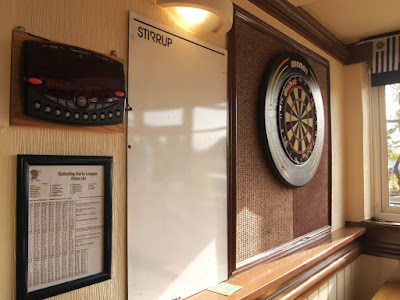 What a great looking pub. A proper sixties style estate pub �� really enjoyed the history behind it too and I always imagined Kettering to be full of pubs like this

Kettering centre is all historic pubs of varying quality, but the estates are dotted with these kind of boozers, most of which have survived. The Harlequin, Mikado Pheasant, Cordwainer, Leather Craftsman, Piper, Woolcomber, and a few even newer ‘Harvester’ style places for the industrial estates. I’d go to a few of these more often but they’re a bit too spread out so inevitably end up in the Three Cocks in town which is a favourite of mine.