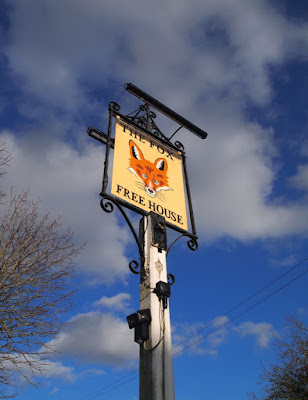 Every now and then I like to choose a good book, dust off the old camera, and use what little remains of our rural public transport to search out new pubs in far-flung places. Anyone that does similar will know it can take a fair bit of forward planning to get to where you want to be at more or less the time you'd like to be there on these jaunts, and no matter how much research you've done beforehand, there's always going to be an element of hit-or-miss about the day. The main danger being that your destination pub won't be open at the advertised time, or even worse, not open at all! Rural villages are already littered with long-closed locals, and sadly they're still closing at a truly alarming rate. 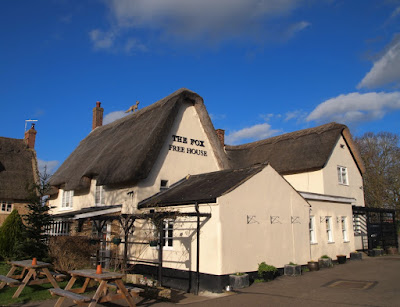 Perhaps just as bad from my perspective is when the pub in question 'is' open, but just doesn't match the rose-tinted vision of pubby-perfection I've held in my mind on that long bus journey. I'm generally travelling with knowledge of a pubs gaming interest of course, but I'm also looking for good locals pubs, and ideally a nice pint too. Town centre chain bars and the 'pub-as-restaurant' model don't particularly interest me, and neither do pubs that are attractive and traditional on the outside, but bland, stripped-out, and entirely lacking in charm and character within. In common with the pub games that this blog is mainly concerned with, what I'm hoping to find is a pub that's not entirely lost its connection with the traditions and history of the community it serves. 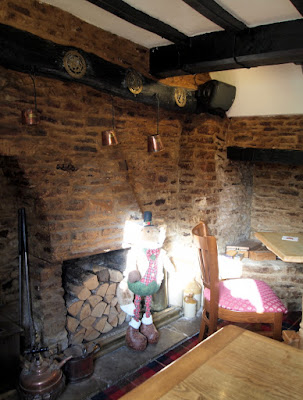 So, one train and two meandering bus rides into the heart of Bedforshire later, I found myself more than a little disappointed with my initial pub choice. Sometimes it's hard to put your finger on why a pub just doesn't 'do-it' for you, but this otherwise perfectly serviceable, and outwardly attractive village local (which shall remain nameless for obvious reasons) 'really' didn't do-it for me. A bit bland and gentrified within, polite but thoroughly unengaging locals and landlord, just a little bit dull if I'm honest. Perhaps it was me, but despite the presence of a very fine old skittles table in the corner that I know gets regular use in a local league, I was struggling to see a good photo opportunity, and just couldn't think how I was going to make the place seem anything like interesting, because it just wasn't to my eyes! Underwhelming then, though clearly not to the handful of locals in at the time, and of course I'm genuinely pleased that the community hasn't lost its single remaining boozer in the way that so many villages already have. Perhaps it was me... 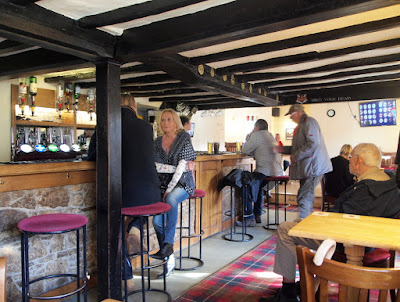 Cutting my planned two hour lunchtime pint(s) short, I did a quick recce on the internet (thank heavens for rural 3G) and caught my third bus of the day to the two-pub village of Carlton. This was more like it! A swift half in the snug of the thoroughly modernised, but actually very pleasant Royal Oak, before strolling the length of the village for my second stab at a destination pub worth travelling for, and hopefully worth writing about. 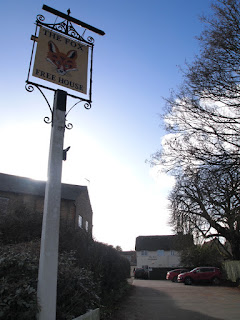 I knew very little about The Fox before visiting that day, other than it has a good reputation for beer (entirely justified I'd say), is open all day every day (rare and very welcome, particularly for a village pub), and that it plays host to the local game of Table Skittles, or 'Hood Skittles' as it's often known round these parts. I certainly wasn't aware of how chocolate-box pretty the pub is, a legacy of its former life as a farmhouse. In fact it's a bit of a thatched beauty, nestled between the village high street and the road to nearby Turvey, and with a cottage garden at the front that looks exactly the place to be on a warm summer afternoon. You really couldn't ask for a more attractive and welcoming sight after spending the best part of two hours travelling. 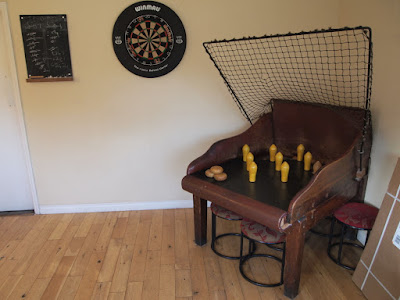 After many years as a Charles Wells Brewery house, The Fox is now free of tie and in the safe hands of licensee Alison Brown who bought the pub in 2014. There's a good overview of the pubs history on the Bedfordshire Community Archive webpages which suggests it was a rather small, dark and pokey place originally, trading none-too successfully it seems as a simple village alehouse. The pub today has clearly lost much of its original multi-room layout, but nevertheless it now comfortably straddles the divide between modern open-plan convenience with a strong food offering, and a pub that retains plenty of genuine character and essential 'pubbiness'. I took a strong liking to The Fox immediately I walked through the door, and was made very welcome by Alison who was busy keeping the Saturday afternoon drinkers served at the bar. 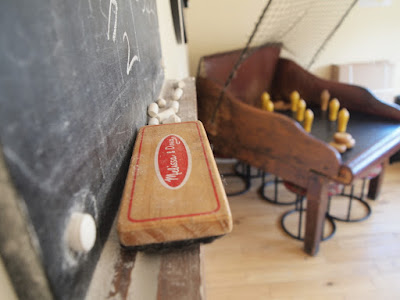 One thing I've noticed from visiting some of the more traditional pubs in the county, is that Bedfordshire pubs are generally rugby pubs, perhaps even more so than neighbouring Leicestershire and Northants. Sadly I couldn't stick around for the whole game, but it was good to see a small but enthusiastic crowd in for the weekend Six Nations matches, a pub tradition I've been enjoying since its earlier Five Nations days, but which seems to me to be on the wane as a traditional afternoon session these days. 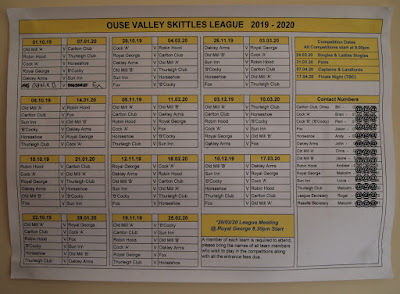 The northern half of Bedfordshire is also very much Skittles country, the version known more widely as Northamptonshire Table Skittles being the game of choice. The skittles table is sensibly located in a separate games room to the rear of the pub (it's a noisy business), and shares throwing space with the Dartboard. Tuesdays are match days in a league that would also be entirely new to me that day. That's because the Ouse Valley Skittles League, in common with many similar pub games leagues around the country, doesn't seem to advertise its existence very widely. 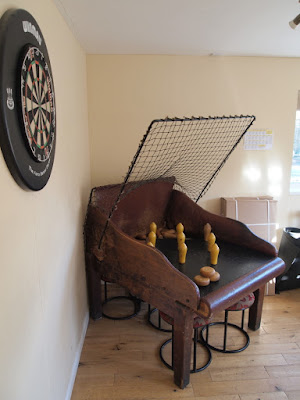 12 teams make up the Winter competition, which runs from October through to March with a finals night in April. I'm not entirely sure if there's an equivalent Summer league. There are currently 10 venues for the game in the Ouse Valley league, a mix of pubs and social clubs dotted around an area to the north of Bedford, stretching almost as far as Wellingborough in the games heartland county of Northamptonshire.

The skittles table was fully equipped with a set of Boxwood pins and cheeses ready for practice and casual games, a good enough reason to visit the pub even without the attraction of a bite to eat, or a few beers in the garden of a really lovely village pub. 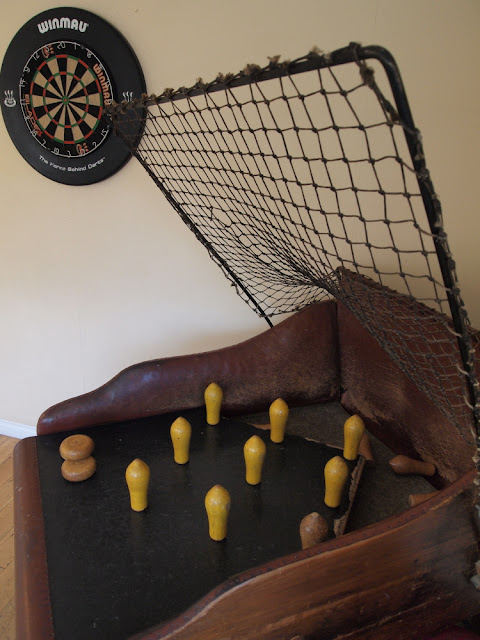 You're far too kind!!! Name and shame!!
Second one looked good though ....went to Bedford today and was massively underwhelmed with it...

Well there was nothing much ‘wrong’ with it, just utterly un-newsworthy. Bedford is difficult, there are some good pubs on the outskirts, Kempston being pretty decent but it doesn’t help my cause that I find GK and Youngs & Wells beers not worth travelling for. The Welly, Brewhouse & Kitchen, and the refurbished Foresters are my go-to pubs. The craft bar is very specialist, great if you like Sours you’ve never heard of...